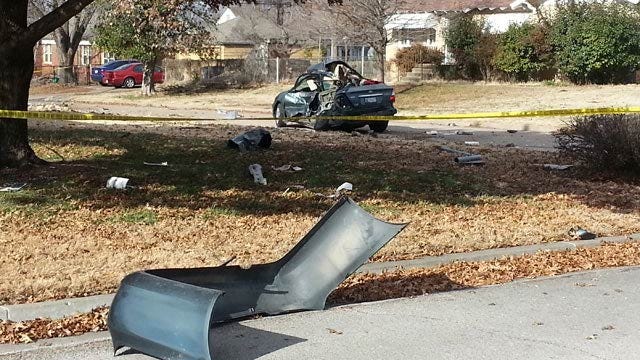 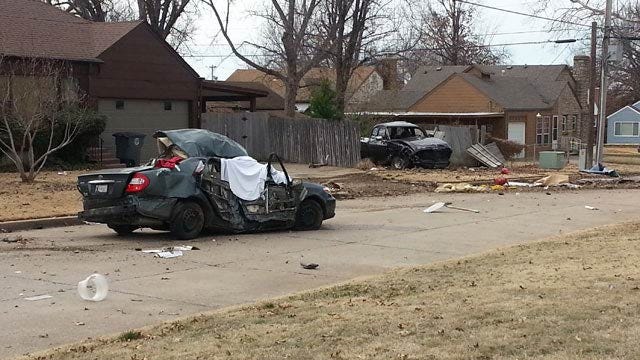 Tulsa Police say a 46-year-old woman is dead after a thief hit her car at an intersection, then ran away Wednesday morning.

Police are looking for a man who slammed his pickup truck into a car driven by Christina Bradshaw, killing her.

It happened at Ninth and Richmond just before noon.

In Kathleen Sandridge's neighborhood crime scene tape is up, police are all around, and debris from a deadly car accident is scattered on the street and in several yards.

"This is really a quiet neighborhood," Sandridge said. "I was asleep and all of a sudden, and there was a big boom, and of course my dogs…they started going crazy."

Police say the fatal accident started when a thief tried to steal a trailer a few blocks away.

"For reasons, really right now unknown to us, got spooked, jumped in a pickup which we believe is stolen, fled the scene at a high rate of speed," said Tulsa Police Captain Steve Odom.

The truck hit Bradshaw's car at Ninth and Richmond.  Captain Odom says it's a terrible start to the New Year.

"This person was just minding their own business, and driving through a neighborhood and we don't think about it, ended up getting killed. Very tragic," Odom said.

The stolen pickup hit a fence and a utility pole, knocking out power to about 100 homes in the neighborhood.

The driver of the stolen pickup got out and took off running.

Officers from the Gilcrease and Riverside police divisions searched for him using police dogs and a helicopter.

They say the man shed some of his clothing as he ran away.

The suspect is described to be in his late 20s-early 30s, white, with a buzz haircut.

Anyone with information should contact Crime Stoppers at 918-596-COPS.