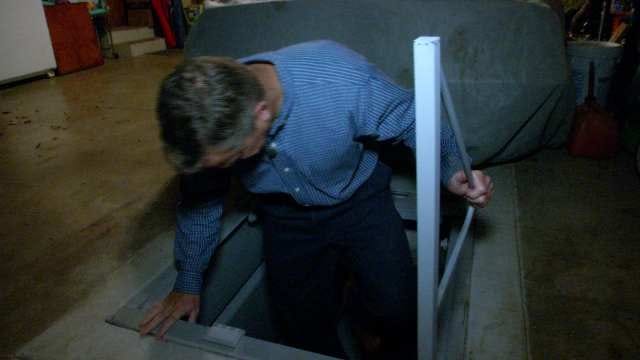 In a state notorious for deadly tornadoes, Oklahomans know storm shelters can mean the difference between life and death. More and more, families are installing shelters to protect them from Mother Nature's fury. But should your house get hit, what comes next?

When tornado sirens sound in Green Country, heading for shelter is the routine for many families. The King family is prepared to survive a tornado of any strength with their below-ground storm shelter in their south Tulsa home.

"We feel very secure having an underground shelter, but after that security we also have to consider how are we gonna get out? Should our home be destroyed by a tornado, how would we let someone know that we were actually there?" Vince King said.

It's a question all of us should be asking.

If a large tornado strikes in Tulsa like it did Moore earlier this year, the landscape would be unrecognizable. And if you're left trapped in a vast field of debris, how will rescue workers find you? That's where geo-tagging is critical.

Geo-tagging is the term for finding the exact latitude and longitude coordinates for a place, like a storm shelter, so that first responders can use a GPS to search out and rescue families in the damage path of a tornado.

Many communities in Oklahoma are proactive in their effort to geo-tag shelters and keep a record of it. Muskogee County has been doing this since the end of 2010.

"There are no landmarks after a tornado comes through. There's no homes to guide you, no street signs, and with the GPS coordinates, that's the thing--a tornado can't remove your GPS coordinates, so you always know where to go," said Jeff Smith, Muskogee County Emergency Manager.

Over 250 shelters are now on record with emergency management, including those in homes, schools and businesses. They have them plotted on a map with a detailed listing of coordinates sent out to first responders, only in the case of a significant weather event or a drill with local jurisdictions.

"It's one of those things we're glad we have it, but we hope to never have to use it," Smith said.

Registering a storm shelter with Muskogee County is simple and free through the county's website. Once a storm shelter is registered, emergency managers are happy to come out and geo-tag your shelter. The city of Broken Arrow has a similar program with an online registration process, as well.

"A lot of people are really excited about getting their storm shelters tracked, and that way, they know that's just one more leg of the safety table they're under," Smith said.

For a Tulsa family like the Kings, registration of their shelter does not include geo-tagging.

"We paid for permission to put in a storm shelter--that's it. That's where it stopped," King said.

Tulsa residents are required to get a building permit for their storm shelter, but there is no official program for geo-tagging in eastern Oklahoma's largest city, even though FEMA requires it for shelters they pay for.

Roger Jolliff, with Tulsa Emergency Management Agency, hopes Tulsa will implement a citywide geo-tagging program. He's lobbied the city council about this, but admits there are challenges and even risks to the process.

"People need to be aware that when they're geo-tagging, that you could inadvertently send that information out to the entire world, and of course any information that you provide to the database for the safe rooms, you know, could be construed as public information and could be released at some point, so you just need to be aware of that," Jolliff said.

"If first responders are overwhelmed, we're impacted by a tornado, then it may take quite some time to get to the point where we're really searching for safe rooms," Jolliff said.

That's why Jolliff recommends taking that next step for yourself: find a friend or relative outside of your immediate neighborhood who can seek you out. Not all of Tulsa first responders may have equipment to determine an exact GPS location anyway, he said.

If rescuers can't get to you and you're trapped beneath debris, there are ways to help yourself.

"Say, if a tree falls on the door, do they have a hydraulic jack, and you know, some cribbing and shoring equipment that they could raise the door open?" Jolliff said.

The King family keeps an emergency kit in their shelter, knowing that being trapped for a time beneath their house is a real possibility. To date, there are no confirmed deaths from someone being trapped in a shelter.

Geo-tagging is a growing trend, but for now, Tulsa families will need to take extra steps to assure their safety following a tornado. For Broken Arrow and Muskogee County residents, it's a service that could keep a family secure after a catastrophe.

"It's a very minor expense compared to what's saved in the long run," Smith said.

King said, "If at some point the Fire Department, the City of Tulsa, however that might work, offers us the opportunity to register or geo-tag our shelter, then we would absolutely do it."

Tulsans who want their safe rooms on the unofficial record with the 911 center can call the Mayor's Customer Care Center at (918) 596-2100.