Beer Loves Get A Taste Of Change At Tulsa's Oktoberfest 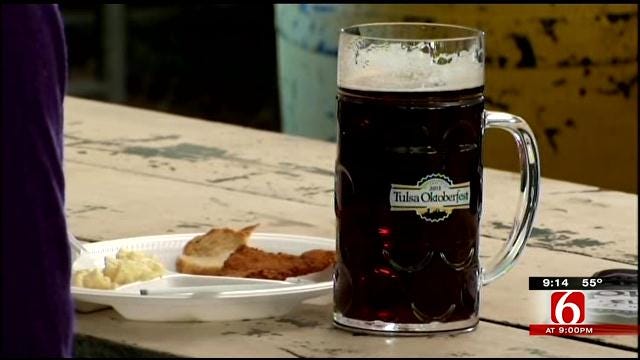 A change to the way beer is served at one of Tulsa biggest festivals appears to be a hit with both visitors and law enforcement.

More than 65,000 people are expected to attend this year's Oktoberfest. This year, the festival made a controversial change. Instead of offering 64 ounce pitchers of beer, the beverage was served in $4 commemorative masskrugs, or beer steins. The steins were smaller, and made of lightweight plastic.

Event director Tonja Carrigg says the steins have been a huge hit. More than 15,000 have been sold so far.

"It's a fresh change and it just made sense for us," said Carrigg.

The smaller steins mean fewer ounces of beer, and fewer worries for police.

"If you get started on one of these steins, you're only compelled to drink 10 ounces," Cpl. Mark Shelton with the Tulsa Police Department said.

Along with the 35 off duty police officers inside the festival, on-duty officers are getting paid overtime to set up check points outside.

Sunday is the last day of Tulsa's Oktoberfest.