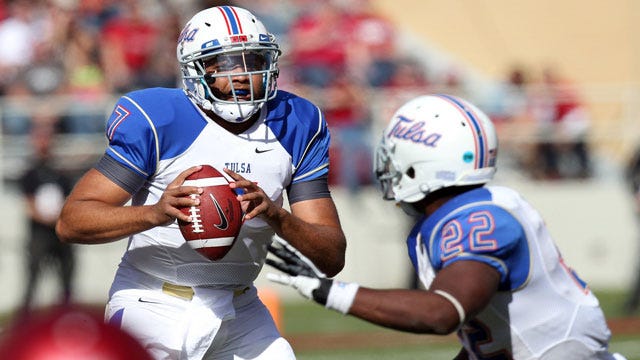 Often times when you're stressed, all you really need is a good vacation.

That proved true for the struggling Golden Hurricane Saturday night, as Tulsa packed its bags for El Paso and came away with the 34-20 win over UTEP.

Tulsa got off to a fast start, driving 76 yards on eight plays to take a 7-0 lead. The drive was capped by Ja'Terian Douglas' 3-yard touchdown run, but was highlighted by a spectacular 34-yard pass and catch by Green and freshman Keevan Lucas.

UTEP answered back with a 45-yard field goal to come within 7-3, but Tulsa came right back to answer. TU drove all the way from its own 25 to the UTEP 26 before Green and Lucas hooked up for more magic.

Green lobbed one deep into the end zone where Lucas leapt over the back of the defender to haul in a tremendous touchdown reception that gave Tulsa the 14-3 lead.

After forcing a UTEP punt, Green and the TU offense kept the momentum flowing with yet another impressive scoring drive and another spectacular touchdown play.

On 3rd and 7 from their own 16, Green found Thomas Roberson for a 49-yard catch-and-run all the way to the UTEP 35 yard line. On the very next play, Green bombed one deep into the end zone where Roberson mirrored Lucas with a jump-over-the-defender-catch to haul in the touchdown.

Roberson's third touchdown catch of the season gave Tulsa the 21-3 lead and it looked like the Golden Hurricane was going to run the Miners right out of their own stadium.

UTEP added a field goal before the half to cut it to 21-6, but things got tight quickly in the third quarter.

Autrey Golden took the opening kick of the second half back 100 yards to cut the TU lead to just 21-13, and just like that the Miners were back in the game.

Tulsa bounced back when Carl Salazar drilled a 38-yard field goal to settle things down, then followed with a 27 yarder later in the quarter to go up 27-13.

Things appeared to be getting out of hand again, but UTEP had one last bullet in the arsenal. On 3rd and 7 from its own 29, Jameill Showers hit Jordan Leslie for three yards, but Leslie had bigger plans than that. After making a couple of guys miss, Leslie dashed 79 yards to the end zone to cut the Tulsa lead to 27-20.

But as they had done all night, TU took the hit and responded.

The Golden Hurricane marched 66 yards on 10 plays all the way to the UTEP 2-yard line. That's where they faced the biggest decision of the game. On 4th and inches from the 2, coach Bill Blankenship rolled the dice and went for it. Green proceeded to plow his way into the end zone, putting TU up 14 and sending a clear message to both teams: Tulsa was playing to win, rather than not to lose.

Green's touchdown capped a huge day for the oft-criticized senior quarterback. Green tossed for 226 yards and two scores, completing 14 of his 17 pass attempts. His performance came at a crucial point for Tulsa, which simply couldn't afford to fall to 1-5 on the season.

Trey Watts also had a big day, dashing for 142 yards on 27 carries to pace the Hurricane's run game. TU rushed for 204 yards on the day with two touchdowns.

Lucas had at least 80 yards receiving for the second straight game, hauling in four passes for 85 yards and a score. Lucas has hauled in 10 passes for 165 yards in the past two games for the Golden Hurricane after catching just four balls for 32 yards in the previous four games.

Showers struggled for the Miners, completing just 12 of 30 passes for 166 yards with one score and two picks. UTEP did run for 222 yards, but played from behind the entire game.

Freshman Aaron Jones led the way on the ground, sprinting for 90 yards on 15 carries. Jordan Leslie led the way for the UTEP receivers, collecting 102 yards on just four catches.

Tulsa (2-4, 1-1) has next week off before heading to Tulane for what now looks like a C-USA west showdown. The Green Wave upset East Carolina this week, improving to 4-2 (3-0) on the season.