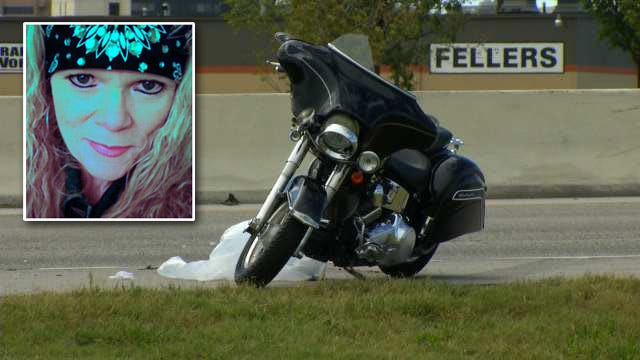 A Tulsa woman was sent to the hospital and put on life support after a crash on the Broken Arrow Expressway Saturday. Police are still seeking additional witnesses to the incident.

Deborah Vaught is a member of the Tulsa Chapter of Women in the Wind motorcyclists. Her family reported that she was removed from life support Sunday evening.

Police say Vaught was driving her 2007 Harley Davidson motorcycle westbound on the BA at the Interstate 44 exit Saturday afternoon when a car abruptly changed lanes in front of her. Police initially told us the wreck took place about 1 p.m. but we have since learned it was called in at 12:17 p.m.

"She was properly positioned in her lane and doing the speed limit," said Corporal Mark Shelton of the Tulsa Police Department.

Shelton said a car in front of Vaught was in the exit lane to I-44 eastbound to Joplin when it abruptly moved back onto the Broken Arrow Expressway.

"It basically forced her to lay her bike down," Shelton said. "It was a non-contact crash."

Stephanie Hatter knows Vaught from the Tulsa chapter of Women in the Winds. She said things are not looking good for her friend's recovery.

"She's a very caring, very giving woman," Hatter said Sunday. "In a time where not too many people are nice to everyone, she has a very sweet soul."

Vaught is a mother and a business woman who owns a construction and painting company. The Owasso native is known as "Ghost," according to the Women in the Wind Chapter on Facebook.

A special traffic investigation crew was brought in to work the wreck Saturday. Witnesses were not able to give police tag number of the car, which did not stop. Shelton didn't have a description of the car Sunday morning.

Vaught, who police say was not wearing a helmet, was taken to the hospital in very serious condition. Her chapter sisters were at the hospital since the wreck to support the family.

Chapter president Stephanie Hatter said she hopes the driver of the car involved will see this story and call police to help explain what happened.

"We're just hoping that someone will see it and say, 'I need to go take care of this,'" Hatter said. "We just want to know."

Police are asking anyone who witnessed the wreck to contact Crime Stoppers at 918-596-COPS.