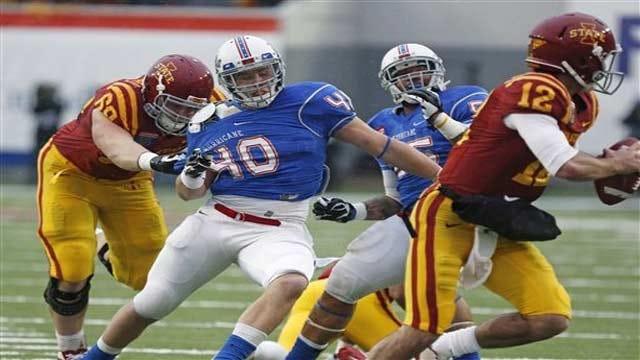 Tulsa fell to Iowa State 38-21 Thursday night at Chapman Stadium.  Here's a quick breakdown, stay with us for the full game recap.

What it means for Tulsa:

1-3 is never pretty, but in this case it really doesn't matter for the Golden Hurricane. None of the losses have been to conference opponents, so all of TU's goals are still accomplishable. Tulsa has to move forward and that starts next Saturday against Conference USA west foe Rice.

The Owls have looked very strong so far this season, hanging around against Texas A&M and defeating Kansas. This head-to-head meeting could go a long way in deciding who wins the west division in 2013.

Receiver Thomas Roberson saw his first playing time of the season and took advantage. Roberson has been out with an injury, but wasted no time making an impact in his debut. The junior wideout hauled in six balls for 63 yards and two touchdowns. With the loss of Keyarris Garrett, TU needs Roberson to play big the rest of the season.

For the third time this season, I could write a novel in this section. All three Tulsa losses have been riddled with turnovers and silly mistakes. Tonight, four turnovers doomed the Hurricane and constantly put the defense into impossible situations.

When the TU offense wasn't turning the ball over, it was stalling. Tulsa ran for just 89 yards on an Iowa State defense that entered allowing an average of 224 yards-per-game on the ground. The Hurricane was just 3-12 on third down.

Player of the game:

Roberson would get the call, but some costly dropped balls hurt TU's momentum. Instead, Trey Watts wins again. Watts had a quiet night but still accumulated 107 yards of offense and rushed for a touchdown.

It was over when:

Trailing 31-21 with a little more than three minutes left, Cody Green lobbed up a floating duck that was picked by ISU's Charlie Rogers at the Tulsa 35 yard line. That ended any hope of a late comeback.

The real season starts next Saturday for Tulsa. If the reigning C-USA champs want a chance at a repeat, a win over Rice next week might be a must. Tulsa needs to put all its eggs in that basket, because a 0-1 start in C-USA play and a 1-4 start overall might send this season spiraling out of control. Kickoff from Chapman Stadium is set for 2:30 p.m.