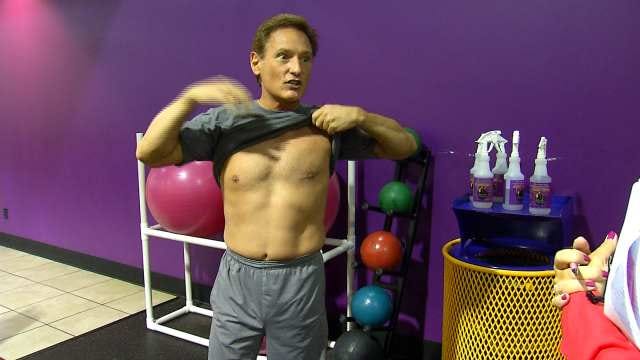 You have probably heard the statistic that one in eight women will develop breast cancer sometime in her life. What you may not know is that men can get breast cancer too.

While it's pretty rare, it's estimated more than 2,000 men will be diagnosed this year.

For one Tulsa man, it came as a complete shock.

Just about 5 days a week, you'll find Tim Seelig in the gym working out. He takes his health very seriously. Last year he was very sick.

He had found a lump in his chest and was told it was a cyst but then.

"One day I was taking this heavy box way up high, pulling it down and it slipped and you catch it and when I caught it raked down across my chest in catching it and LeAnne, I went down to my knees it hurt so bad and I said, ok, I'm done and I went back to the doctor and they did a biopsy on me," said Tim Seelig.

Then there was the diagnosis, breast cancer.

About one percent of breast cancers in the US occur in men, it's estimated 1 in a thousand will develop it in their lifetime.

For Tim, he underwent a mastectomy to remove the cancer.

"It's a strange feeling to stand and look at yourself in the mirror and remember when you used to be a great, big barrel-chested guy and you're a little bit less. There's a T-shirt a friend made for me, the definition of a male breast cancer survivor is one that's lacking a little bit in chest but has an abundance of heart," said Tim Seelig.

Tim says he has a lot to live for. He just found out he's going to be a grandpa and he wants to be around for a long time to spoil his grandchild.

He doesn't shy away from telling others about his diagnosis and he hopes all men will take note.

"It's something you need to pay attention to because we as men, being only a one percenter, you don't think that and when I went to the doctor that time and he said it looks like maybe a cyst of some kind and it's nothing to be too concerned with, I'm a guy, that makes sense that's the last thing I'm thinking about happening to me especially any kind of cancer in my life, let alone that," said Tim Seelig.

Last year was Tim's first time to be a part of the Komen Race for the Cure. He joined my team and walked with hundreds of other survivors.

"It's very energizing to hear these people and their strength and their energy pushing up and come and it's like osmosis. You just feel all this and next thing you know you're a little bit taller and we're walking and that 5K it seemed like, we're finished all ready, type thing and attitude and it was a wonderful experience that I'm proud to be a part of," said Tim Seelig.

The Susan G Komen Race for the Cure event at ONEOK Field is less than 3 weeks away. The race is Saturday, September 28.

There's something for everyone from the serious runners and the timed 5K, a 5K walk or a one mile walk or run. And for survivors, like Tim, there's a special celebration, the survivor parade.

You can create your own team or join mine, just go to NewsOn6.com and register.

CBS News Many employees who have been working from home for the past few months are starting to return to the office, and they’re finding their office is different than the one they left behind.

News On 6 Tulsans have a chance to get free produce and dairy products starting Monday. Volunteers started handing them out at noon and will do so until supplies run out. The giveaway is at Northwest Tulsa Hub near highway 412 and north 49th west avenue.
View More Stories