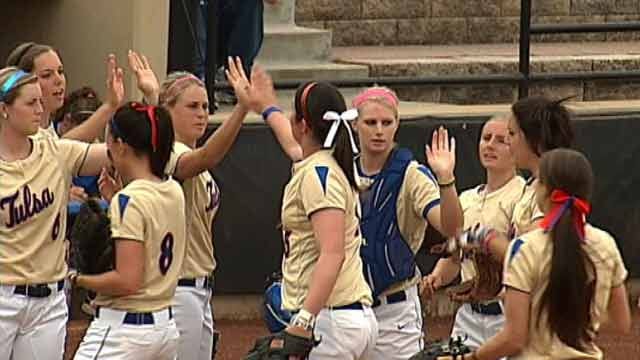 The No. 24-ranked Tulsa softball team upset No. 6 Texas during the first day of the Texas Invitational on Friday at McCombs Field.

The Golden Hurricane (9-3) took down a top-10 team for the first time since 2009, when TU defeated No. 10 Oklahoma during NCAA Regional Play.

TU also defeated Utah State 8-0 (5 innings) in its first contest of the day.

Shortstop Samantha Cobb went 2-of-4 with a two-run home run in the sixth inning and three RBI. Middlebrooks drove in two runs and walked twice, while right fielder Haley Henshaw and first baseman Julie Kernen each drove in runs for the Hurricane.

In the afternoon affair against Utah State, Tulsa exploded in the third inning for six runs as the Hurricane stormed past Utah State 8-0. Creger pitched three innings allowing only two hits while striking out six to improve her record to 5-0 on the year. Freshman Caitlin Sill pitched two innings in relief allowing no hits and striking out a batter.

Henshaw drove in four of TU's eight runs, while Barrett had three of TU's 13 hits.

The Hurricane will face Lamar to close out round-robin play at the Texas Invitational tomorrow in a 1 p.m. tilt.