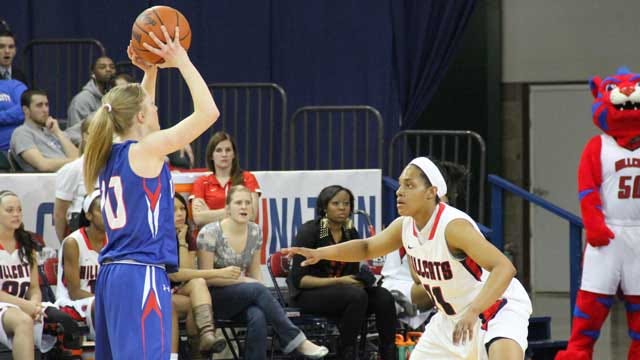 The Rogers State women's basketball team never trailed on Thursday night as the Hillcats knocked off No. 3 Lubbock Christian, 78-70, inside the Claremore Expo.

The Hillcats opened the game with a 10-0 run capped off with a three-pointer from Leah Smith. The Lady Chaparrals fought back with an 8-0 run after a time out to cut the deficit to two points but Sierra Cornwell knocked down a trey to push the lead back to five points. RSU led by as many as 12 points in the first stanza but the Lady Chaps made a comeback in the final five minutes, using a 9-0 run to knot the game 34-34 at intermission.

Cornwell opened the second frame with a steal and a fast break bucket to give the Cats the lead. The teams traded buckets with LCU cutting the RSU lead to one point three times before Logan Froese converted a free throw and Kelby Fritz hit a three-pointer to give RSU a five point lead. The Hillcats created some separation with a 6-0 run to push their advantage to 62-53 with less than nine minutes to play. RSU clung to the single digit lead the rest of the way. The Lady Chaps cut the deficit to a bucket with 6:47 remaining but RSU converted consecutive shots to push the lead to six points. RSU held on for the win in the final five minutes of the game, feeding off a strong defensive effort.

Froese swatted a career-high six shots while tallying 15 points for the Cats. Cornwell stuffed the stat sheet with 15 points, seven assists, seven rebounds and four steals. Leah Smith finished with 13 points, going 3-for-4 from behind the arc while Ariani Silva rounded out the double digit scorers with 12 points.

LCU was led in scoring by Kelsey Canavan with 20 points. Nicole Hampton registered a double-double with 18 points and 12 rebounds. The Lady Chaps edged RSU on the boards 36-35.

With the win, the Hillcats move into sole possession of second place in the Sooner Athletic Conference standings, two spots behind conference leader No. 2 Oklahoma City. LCU (23-3, 10-3) falls one game back from the Hillcats in third place.

Rogers State (21-6, 10-3) returns to action on Saturday as the Hillcats host Wayland Baptist at the Claremore Expo. The game is set for 1 p.m.