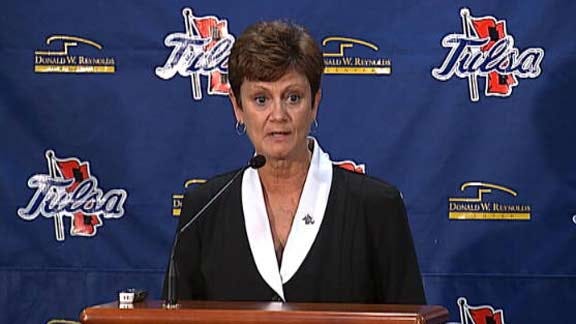 Taleya Mayberry, Kelsee Grovey and Tiffani Couisnard all scored in double figures to lead Tulsa to a 67-65 lead over Tulane on Sunday afternoon at the Reynolds Center.

The Golden Hurricane moved to 9-13 on the season and 4-5 in Conference USA, while the Green Wave fell to 17-5 overall and 6-3 in the league.

Mayberry had a team-leading 24 points and four assists, and added seven rebounds and a steal, while Grovey recorded 16 points, and Couisnard had 10 points, and game-bests of nine rebounds, four steals and two blocks. Mayberry's 24 points gives her second place in Tulsa's all-time scoring chart with 1,536 points.

Tulane had an 11-9 lead in steals and a 5-2 advantage in blocks, while both teams had 36 rebounds and 12 assists. Tulsa had 16 turnovers compared to the Green Wave's 17.

Tulsa had a 10-4 run to start the second frame to tie the contest at 39-all, and tied the contest three more times before taking the lead for the remainder of the contest with just 1:49 left to play.

The Green Wave was led by Whitney Bibbins with 22 points and Danielle Blagg with 12 points, both coming in off the bench. Tiffany Dale pulled down 10 rebounds and had five blocks, while Tyria Snow posted four assists.

Tulsa will return to action on Thursday against Houston. Game time is set for 7 p.m. at the Hofheinz Pavilion in Houston.