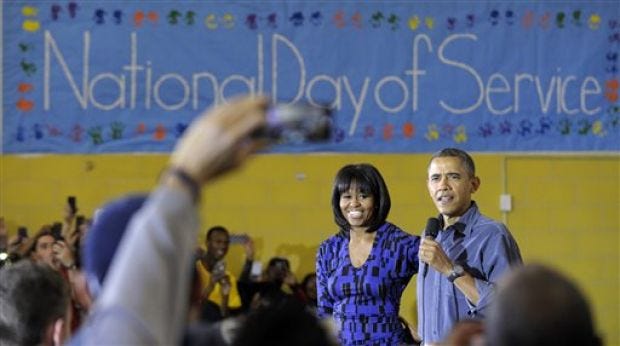 On the brink of a second term, President Barack Obama invoked Martin Luther King Jr.'s commitment to service Saturday as inauguration-goers flocked to the capital city for a distinctly American celebration including an oath-taking as old as the republic, a splashy parade and partying enough to last four years.

"I think we're on the cusp of some really great things," Vice President Joe Biden predicted for a country still recovering from a deep recession.

Freshly built inaugural stands at the Capitol gleamed white in the sun, and hundreds of chairs for special guests were set out on the lawn that spills down toward the National Mall as the president and vice president began their inauguration weekend.

Julius Cherry, in town from Sacramento, Calif., brought his family to the foot of the Capitol to see the area where their official tickets will let them watch the public ceremonies on Monday.

"There were people who said they'd never vote for an African-American president," the 58-year-old lawyer said. "Now they've voted for him twice, and he won the popular vote and the electoral vote. That says something about his policies and his team."

Said Erika Goergen, from the Midwest and attending college locally: "It's amazing to be here right now."

Officials estimated that as many as 800,000 people will attend Monday's public ceremonies. That's more than live in the city, if far fewer than the 1.8 million who were at Obama's first inauguration in 2009.

The president made only a glancing reference to race as he spoke at an elementary school not far from the White House after he and first lady Michelle Obama stained a bookcase as part of a national service event organized by the inaugural committee.

"We think about not so much the inauguration, but we think about this is Dr. King's birthday we're going to be celebrating this weekend," the president said.

Because the date for inauguration set in the Constitution, Jan. 20, falls on a Sunday this year, Obama and Biden were to be sworn in for second terms in separate, private ceremonies on Sunday.

The public ceremonies are set for Monday, when Obama will take the oath of office at noon, then deliver an inaugural address before a large crowd and a national television audience in the millions.

The traditional lunch with lawmakers in the Capitol follows, and the inaugural parade down Pennsylvania Avenue toward the White House. There, a reviewing stand was adorned with the presidential seal and equipped with seats enough for Obama and other dignitaries to watch in relative comfort as military units, marching bands, floats and thousands of participants go past. A pair of inauguration balls will cap the day, including one with a guest list that runs to 40,000 names.

A select few -- those who donated as much as $1 million to defray inauguration expenses -- received special access to public as well as invitation-only receptions and parties.

The second term begins in circumstances different in many ways from the first, but familiar in others.

The economy, then in the grip of a fierce and deepening recession, is now recovering slowly as unemployment recedes and stocks flirt with five-year highs. The health care legislation that Obama urged Congress to enact in his first inaugural address is the law of the land, courtesy of a split ruling by the Supreme Court.

Al-Qaida leader Osama bin Laden is dead at the hands of U.S. special operations forces. But the organization he inspired is far from moribund, as demonstrated by the just-ended kidnapping episode Saturday at an Algerian natural gas complex that, according to the Algerian government, left at least 23 hostages dead. The U.S. on Friday acknowledged one American death.

When Obama took office in 2009, his Democratic allies held control of Congress.

Now, divided government rules, and Republicans who control the House lead the way in insisting the administration agree to spending cuts that will reduce soaring federal deficits. Obama has said he is ready to compromise on that.

At the outset of a second term, he also wants Congress to overhaul the nation's immigration laws and take steps to reduce gun violence in the wake of the shooting last month in Newtown., Conn., that left 20 elementary school children dead.

Yet for once, politics seemed to edge ever so slightly into the background in the most political of cities.

Former first daughter Chelsea Clinton headlined a National Day of Service gathering under a tent on the National Mall, where she said she had been inspired by her grandmother, as well as her famous parents. She urged her audience to become part of a "chain of service" by helping the less fortunate.

Biden and his wife, Jill, spent time at an armory pitching in as volunteers packed 100,000 care kits for deployed members of the military, wounded warriors, veterans and first responders.

Biden credited former President George H. W. Bush, a Republican, for starting the "Points of Light" program, which was a sponsor of the event. He said service was an antidote to "the coarsening of our culture. We've got to get back to reaching out to people."

In the evening, Mrs. Obama and Mrs. Biden hosted the Kids' Inaugural Concert, an event paying special tribute to military spouses and children.

Families invited to the event cheered Usher as he sang his hit "Yeah!" Katy Perry, who donned star and stripes for her song "Firework," told the audience, "I'm very proud to be here ... and to see the Obamas and the Bidens here for four more years."