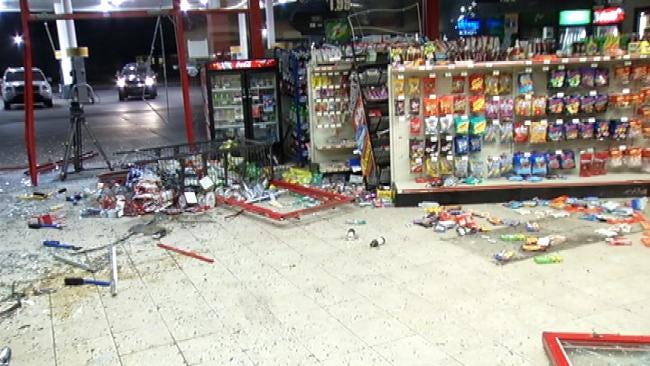 Instead of using a card to get cash, the thief used a stolen pickup truck and a heavy chain on the ATM inside the Wolf Point Convenience store in the 11000 block of East Pine.

The driver tried to withdraw money using his truck, but he was denied. So instead, he took a joyride inside the store, ditched the truck, and then set it on fire.

The owner of Wolf Point Convenience Store woke up to a nasty mess: cracked bricks, broken glass and damaged merchandise.

"All for an ATM that they didn't get," said employee Tina Fowler.

The store's owner shared with us the surveillance video. On it, you can see truck back into the store's wall, right where the ATM is.

When that doesn't work, the driver pulls around and sits in front of the store for a few minutes.

Next, it leaves the parking lot, only to come back later and drive right inside the store.

"Backed up and then crashed through the doors, came inside the business, it looks like drove around, tearing up several of the racks and driving back out the door, leaving," said Tulsa Police Corporal Dan Miller.

Not long after the truck left, police found it on fire about two blocks away.

They also discovered the truck was stolen and the driver was nowhere to be found.

Crews from a disaster restoration company are now left picking up the pieces, trying to create a temporary wall and door until the builders come to fix it.

"Business has been down since Christmas, like 50 percent, and this is setting us back at least a week," Fowler said.

This store has been on the corner of Pine and 169 for a few years. It's been robbed four times, but the thief has never made an entrance like this.

"It takes away your sense of security. You come to work and you want to feel safe. It kind of shoots that a little bit," Fowler said.

Police estimate there's at least $50,000 worth of damage.

The store will be closed for at least a week.

During that time, the owner says he will pay all of his employees.

No arrests in this case have been made, but police say the driver could face felony charges.

Anyone with information about this burglary attempt is asked to call Crime Stoppers at 918-596-COPS.