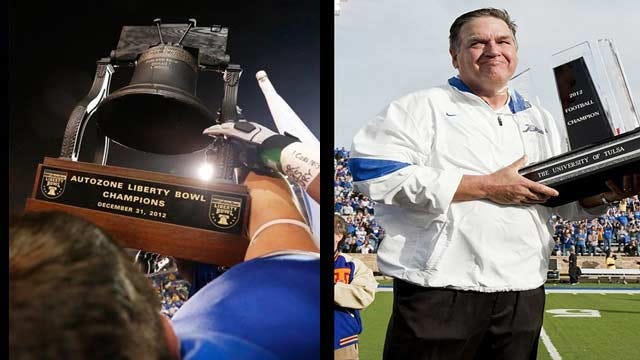 To say 2012 was a pretty good year for the Golden Hurricane football team would be a severe understatement. It was historically great season that no TU fan will soon forget.

A Conference USA championship and a Liberty Bowl title are the headliners, as they should be. Conference titles and bowl wins are every team's goal every season, but there's a lot the Golden Hurricane accomplished this season you might not be fully aware of.

Here's a rundown of the TU's accomplishments, historical performances and school records that we saw this season.

• Only the third time in 30 years TU has finished with more wins than both OU and OSU.

• Defeated BCS Conference-opponent for first time since 1998 when they defeated Oklahoma State 35-20. The win snaps string of 23 straight losses to BCS conference teams.

• This was the 19th bowl appearance in school history, but 8th appearance in 10 years. TU has a 9-10 overall record in those 19 games.

• Dexter McCoil intercepted five passes this season; a team-high. McCoil is the first player ever to lead TU in interceptions for three straight seasons. McCoil leaves Tulsa as the school's all-time leader in picks (18) and is tied for No. 1 on C-USA's all-time list with Louisville's Anthony Strong.

• Cody Green is now 14-3 as a starting quarterback in his college career.

• Hurricane set the school record for total touchdowns in a season with 65. 60 on offense, three on defense and two on special teams. Previous record was 60, also in 2007.

• 11 wins improves Tulsa's all time record to 597-453-27 overall. If they beat Bowling Green and Colorado State to start the season next year, TU will go for win No. 600 against OU in Norman.

• The matchup with Iowa State was the first time since the NCAA expanded regular-season schedules to 12 games in 2006 that a team has started and ended its season with the same opponent.

• Alex Singleton had quite the year. Singleton finished his career with 43 rushing touchdowns, good for No. 4 on C-USA's all-time list and ahead of the likes of Matt Forte and Chris Johnson.