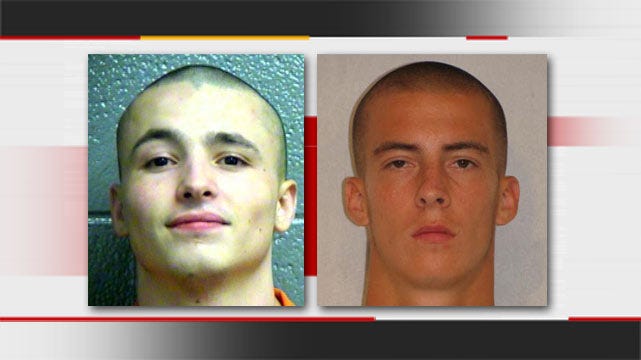 A 24-year-old convicted felon led Tahlequah police on a chase before crashing and flipping the car he was driving early Wednesday morning.

Approximately 1 a.m., an officer initiated a traffic stop for speeding, but Brandon Hembree, of Tahlequah, failed to stop. Hembree led the officer on a chase through the city and continued on back roads on the west side of Highway 82 South.

The officer backed away and discontinued the pursuit because of road conditions, police said. As he drove back toward city limits, he came across Hembree's 2011 Hyundai in a ditch on Stone Chapel Road, about 4 miles south of Tahlequah.

Hembree had been ejected from the car, and his two passengers were inside the vehicle, police said.

According to the Oklahoma Highway Patrol, the car departed the roadway to the right, struck a tree and overturned 1.5 times, coming to rest on its top.

Hembree and an 18-year-old passenger, Samantha Drywater, were transported to the Tahlequah hospital. Hembree was later flown to a Tulsa hospital. A second passenger, Robert Finch, 24, was checked by paramedics and arrested on an alcohol charge.

The Oklahoma Highway Patrol investigated the crash and said the cause was due to DUI, drugs, according to the collision report.

According to the Department of Corrections website, Hembree has served prison time for several felonies, including assault and battery, second-degree burglary, malicious injury to property, possession of a stolen vehicle and aggravated assault and battery. He also has a previous misdemeanor DUI conviction, a drug conviction and a felony drug charge that was dismissed.

Finch also has served time for burglary, larceny of an automobile and drug possession with intent.