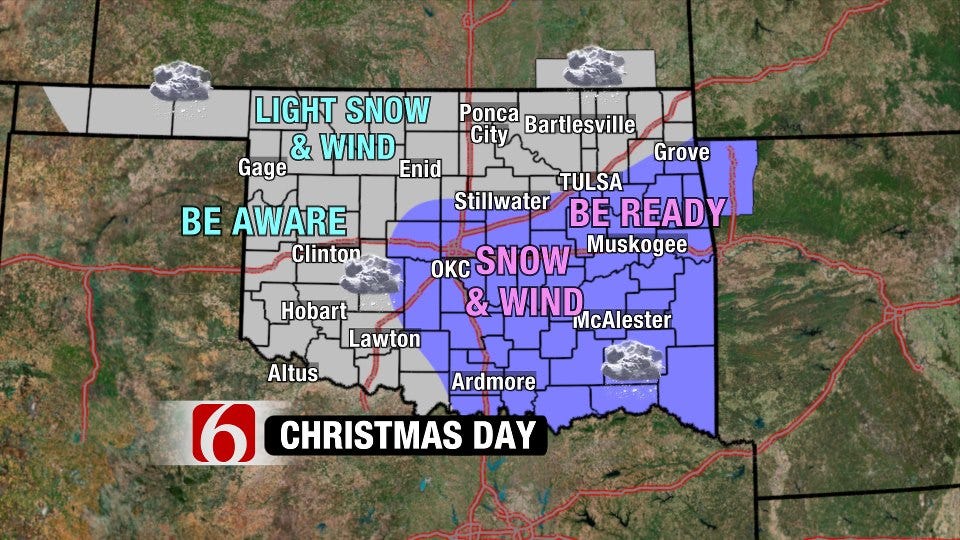 All eyes are on the incoming storm system that may barrel through Oklahoma in the wake of Santa's sleigh. After a dry and mild weekend ahead (great for that last-minute Christmas shopping), a fast-moving storm system will make a beeline for our state. The forecast models have been all over the place with its track and associated snow totals, but here's how we're breaking down the potential right now.

The first consistent trend we've seen is the storm quickening its pace across the region. That allows for the precipitation to begin sooner in the day and likely wrap up Christmas night. An initial cold front will likely start our temperature tumble a day or two before the snow would arrive. That sets the stage for more of a snow event rather than rain or a mix-bag. Thus, snow chances are higher, but where the snow actually falls heaviest is the big question.

The map above is a crude estimation of where the greatest snow potential lies. One computer model, the EURO, has brought the snow much further south, nearly missing the Tulsa area altogether. Another one, the GFS, brings the heaviest bands of snow right along the Highway 412 corridor. In the latter case, Tulsa would be near the bulls eye of heavier snow. With those discrepancies alone, it's hard to pinpoint snow totals at this time. Due to the faster nature of the system, it appears unlikely anywhere in the region would receive over six inches of snow. However, until this storm system actually moves ashore in the West and our computer models can better sample it, we can't close the door on any scenario.

At this time, it does not appear to be a blizzard nor does it appear to be a paralyzing snowstorm. It could end up amounting to nothing more than a picturesque light snow in some areas with other areas missing it entirely. The key is: don't set your expectations too high just yet, but be prepared for our first decent snowfall in almost two years just in case it amounts to more than an inch or two of snow. If Tulsa receives more than 1.3" during the day, it will break the daily snowfall record for Christmas set back in 1975! By later this weekend, we should have a better grasp on its track and take a more precise stab at snow totals. We'll keep you updated. Be sure to follow me on Twitter: @GroganontheGO and "like" me on Facebook for all the latest!