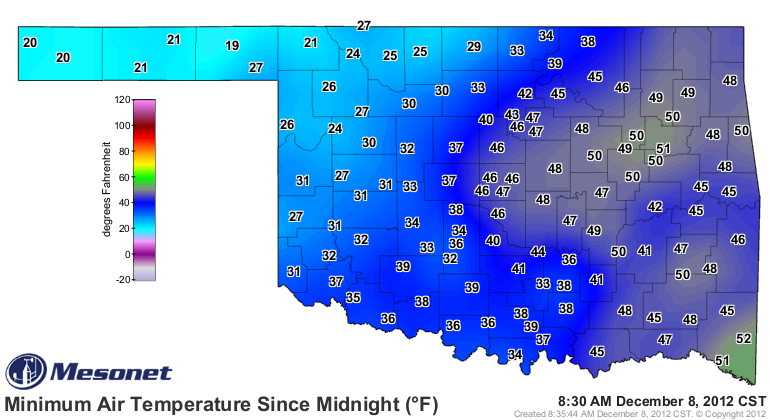 As you can see from the map on the right, our day has started off very mild once again. We will also have another very short thermometer today as the low level cloud cover will be tough to erode and we can only expect a brief glimpse of the sun, if even that. Temperatures will still be much above normal though due to the very mild start and daytime highs will be well into the 50s and possibly a few low 60s for the more southern counties. Despite the cloud cover, our rain chances are minimal with only a few very light showers or perhaps a mist for later today or tonight. Also, our winds will be very light and from a general easterly component. This all adds up to what should be some reasonable conditions for the parades this evening as temperatures will still be in the 50s, winds will be light, and the chances of rain are minimal.

That will all be changing on Sunday as a blast of colder air will be arriving during the morning hours followed by falling temperatures, strong northerly winds to make it feel even colder, and at least a chance of rain or showers. Cloudy skies and light E to SE winds ahead of this front should hold temperatures fairly steady tonight and we will start Sunday morning in the 40s or lower 50s. However, by that evening, look for temperatures to be dropping into the upper 30s and lower 40s and wind chill values to be in the 20s.

There will also be some showers associated with the cold front and possibly some thunder in the more E and SE counties. The chances of measurable rainfall will be on the order of 30%, more likely further east, less likely further west. Also, as colder air aloft arrives early Sunday night, there will be the potential for a wintry mix. The most likely location for snow will be in the more southern counties as a secondary system aloft moves over the colder air that will be at the surface by then.

By Monday morning, our skies will have cleared or will be clearing and lots of sunshine is expected for the next several days. Despite the sunshine, gusty northerly winds through the day Monday will keep temperatures in the 30s and wind chill values that morning will likely be in the teens with air temperatures in the lower 20s.

This is the coldest air of the season and temperatures for Tuesday morning will likely be in the teens followed by a gradual warming trend beginning that afternoon. Light southerly winds and sunny skies should get us at least back into the lower 40s on Tuesday followed by increasing southerly winds for the rest of the work week. That also means warmer temperatures for later in the week and daytime highs should be at or above normal by weeks end.