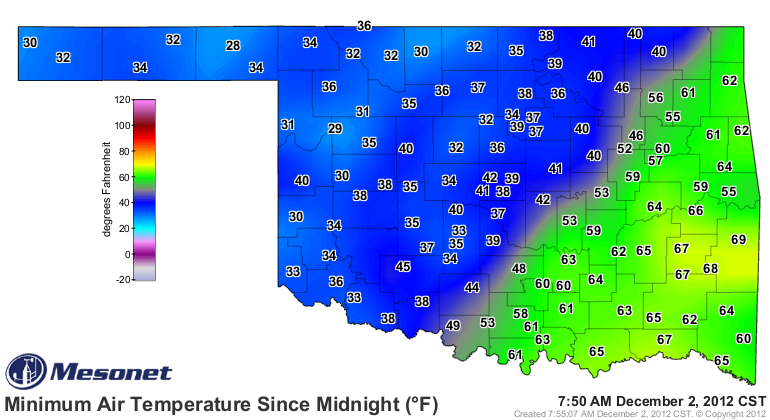 Notice the map on the right, courtesy of the OK Mesonet. Quite a temperature gradient so far this morning as drier, somewhat cooler air worked into the more western counties while the SE counties remained under the influence of warmer, more moist air. That gradient will be washing out during the day as the boundary becomes diffuse and southerly winds return area-wide. Together with lots of sunshine for much of the day, temperatures should have no trouble making it back into the low-mid 70s this afternoon.

Those southerly winds will become strong and gusty overnight tonight and through the day Monday with wind speeds on the order of 20-30 mph or more. That will also result in another record setting start to our day on Monday with morning lows only dropping into the lower 60s. We will also have mostly cloudy skies to start the day Monday and throughout the day which will limit the daytime heating somewhat. Even so, we will be close to record levels during the afternoon with daytime highs expected to be in the mid 70s.

Our next cool front will arrive Monday night and will have the potential to set off some showers/storms. Unfortunately, most of us will miss out on the more significant rainfall with the more E and SE counties having about a 50% chance of rain and little or no rain generally NW of the I-44 corridor. The chances look to be about 30% along the I-44 corridor and even where the rains do fall, the system will be moving along rather quickly so amounts should only be around ¼ inch or so.

Tue-Thu will then be a little cooler, but only in a relative sense. It will be cooler than this weekend, but temperatures will still be above normal with daytime highs in the 60s each day. The latter part of the week and into the following weekend are very uncertain at this time. The longer range guidance has not been consistent for that time frame and the model solutions may flip around a few more times over the next couple of days before settling down into something that we will have more confidence in.

One thing they do agree on is that another cool front is expected to arrive Friday, but there are some indications it will stall out along the Red River. That would have implications regarding cloud cover and rain chances not only for Friday but also Saturday and Sunday as well as how cool it will be behind the system. So, until we get better agreement, looks like the forecast will have to keep at least a slight chance of showers for that weekend.

There are also some hints that the zonal flow aloft may finally start to buckle resulting in a more amplified pattern as we go into the following week and that could eventually allow some really cold air to move this way. Nothing certain by any means, but something we are closely watching as some very cold air has been pooling in the Yukon Territories and eventually some of that will break off and make a move.