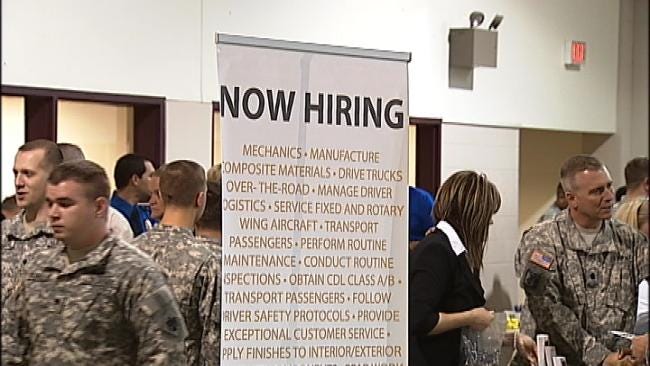 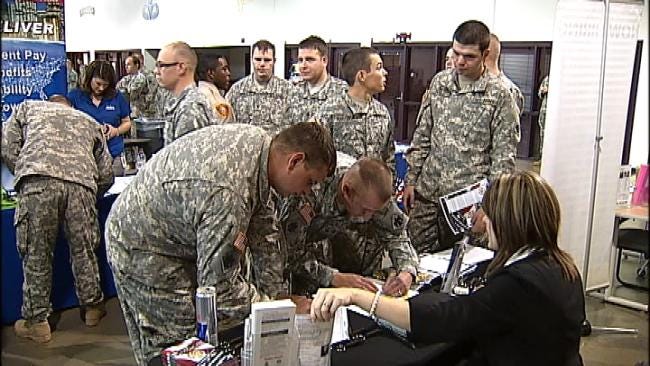 Hundreds of Oklahoma veterans are out of work after returning from deployment, and the Oklahoma National Guard is helping combat the issue here on the homefront.

The Oklahoma National Guard has spent the last year working to lower the unemployment and underemployment rate among veterans and it's hoping Saturday's job fair will add to that success.

"Since I came back, I've been looking," Spc. Joseph Lyons said.

Lyons is part of the 12 percent of his unit who is out of work or underemployed.

"You're just any other person when you take off this uniform," Lyons said. "They don't know if you're a veteran. Most the time we kind of keep it to ourselves. I know I do."

He has struggled to find a job, so he took advantage of the National Guard's Career Fair.

Twenty different companies from across the state – including large insurance branches and the Tulsa County Sheriff's Office – were there looking for quality workers.

"We look for these guys," TCSO Deputy Latif Whitsett said. "They have the honor, the dignity, the pride that is necessary to be an officer with Tulsa County especially."

Since June, the Oklahoma National Guard's Employment Program has found jobs for nearly 150 soldiers and their spouses in the northeastern part of the state.

Private First Class Sarah Venis is one who's relied heavily on the program.

"You dream and plan what it will be like when you get home, and trying to meet that expectation that you set for yourself can be really hard," Venis said.

When she came home from Afghanistan,she didn't have a job, a place to live or a car.

Now, all three of those things are checked off her list.

"People, even though they say they want to hire veterans, they don't know how to take the experience that you've gained and put it into a job, so it was a lot harder to find a job than most people think," Venis said.

The Tulsa Metro Chamber is holding a similar event on Tuesday. The goal is to hire as many heroes as possible.