Do It Or Ditch It: Tulsa vs. UCF, Round Two 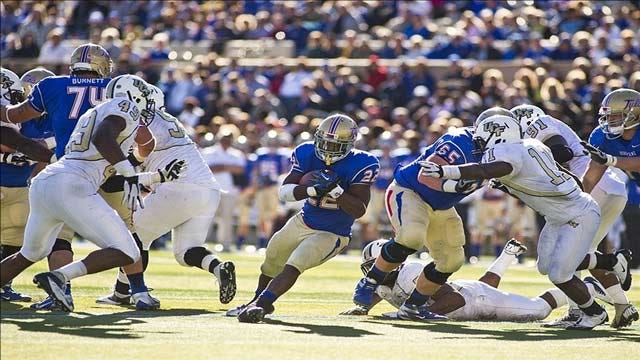 We're just three days away from Tulsa hosting UCF in the Conference USA championship game, which is a perfect time to revisit round one of this matchup, TU's 23-21 win two weeks ago in Tulsa.

There was plenty to like about that matchup for TU fans, including the final score, but there are also some things that need to be corrected for Saturday's showdown.

Here's a look at what the Hurricane should do again and what they should ditch in order to take home the conference title.

Over 2,800 yards, 34 scores and a 5.1 yards per carry average are pretty strong indicators of the effectiveness of TU's dynamic rushing attack. The Golden Hurricane possesses one of the top run games in the country and uses it to set up the pass; not the other way around. Cody Green threw 64 passes while TU only ran the ball 38 times in Saturday's loss to SMU. And no, it wasn't all because the Hurricane was trailing. TU came right out of the gate passing the ball. With that said, here's the stat of the season: The Golden Hurricane is 9-0 in games that they run more than they pass, and 0-3 when they pass more than they run. TU can't afford to forget its identity in the biggest game of the season.

Give the ball to Garrett:

Okay, I know I just said run the ball, but this applies for when TU does pass. With the exception of one play, Cody Green was awesome in the last meeting. Green completed 21/34 passes for 252 yards and three touchdowns. The recipient of those three touchdown passes: Keyarris Garrett. It was quite apparent UCF didn't have anyone who could match up with Garrett's athleticism on the outside, and TU took full advantage. We'll see what coverage adjustments UCF made regarding Garrett, but unless he starts getting doubled, Green needs to get him the ball.

Round one of this matchup was arguably TU's strongest defensive performance of the year. The Hurricane smothered UCF's run game and harassed quarterback Blake Bortles the entire day. The Knights only managed 66 rushing yards on 34 carries, while Bortles was hurried and pressured into a 13/31 passing performance. TU's defenders already proved they can match up with the Knights, now it's just a matter of adjusting to whatever changes UCF might have made.

TU fans are well-aware of the costly mistakes that have plagued this team all season. While the Hurricane has been able to overcome most of them in winning efforts, there remains at least one play a game that simply leaves fans speechless. In the first meeting with UCF, it was Cody Green's lame-duck deep ball just before the half that A.J. Bouye intercepted and returned 77 yards for a touchdown. As bad as the pass looked, this error was on the TU coaching staff. Tulsa had the ball at midfield with a 10-7 lead and under four minutes left in the half. Instead of running the offense, grinding the clock down, and attempting to make that scoring drive the final sequence of the half, they launched one into orbit and gave UCF a free touchdown. TU has to eliminate errors such as that in a game this big.

I know, it's hard to just ditch the kicking game all-together. But freshman Daniel Schwarz has six missed field goals (five inside 40 yards) and six extra points this season, turning what are usually perceived as automatic points into big question marks for TU. In the previous meeting with UCF, Schwarz missed a 29-yarder and an extra point, leaving four valuable points on the field. Last week, TU opted to go for it on 4th down and long inside field goal range on multiple occasions rather than kicking it, and most of the time it failed. It will be interesting to see whether the TU coaches scrap the kicking game again this week, or give Schwarz another chance to redeem himself. My guess is they'll decide to go for it on 4th and short occasions and anything longer than that, Schwarz will be on the kick-til-you-miss plan. One thing is for sure, his leash will be short.

As you noticed, there's one more under the "Do it" category than the "Ditch it." That's because for the most part, Tulsa played extremely well against the Knights in the first go-round and there's not too much that needs to be corrected.

If TU can build off its successes from the previous matchup while improving in the few areas that it struggled, the Hurricane will be Conference USA champions.

Do It Or Ditch It: Tulsa vs. UCF, Round Two