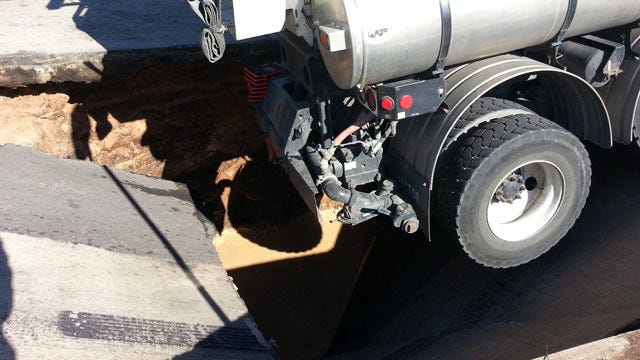 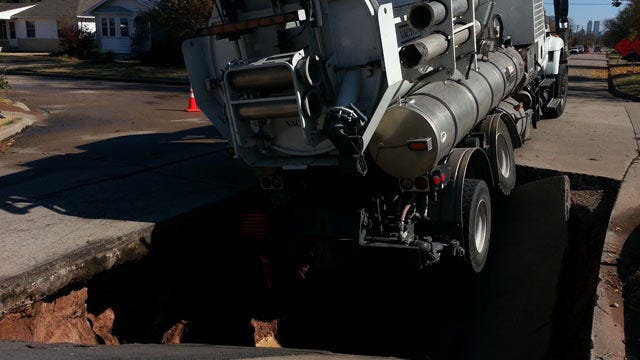 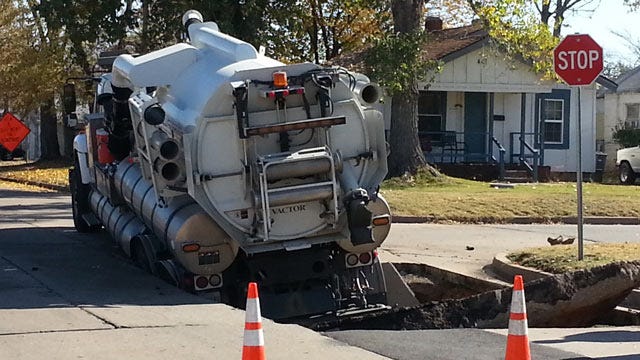 Two city of Tulsa employees weren't hurt, but definitely got quite a scare when a big sinkhole opened up underneath their truck.

It happened in west Tulsa at the intersection of 4th Street and 47th West Avenue Monday.

It was a tough task getting the truck out and on the road.

James Thomas was on his way to a road project when his Monday became a really, really bad start to the week.

"I looked at my worker and he looked at me and I was like, ‘We gotta get out of here,'" Thomas said.

As he started to pull away from a stop sign, the concrete underneath the back of the truck collapsed under the weight of his water-filled truck, weighing more than 60,000 pounds.

"I knew we hadn't hit anything, because we were at the stop sign and getting ready to take off and everything, and I was like, ‘What is this?'" Thomas said. "And, like I say, you felt the truck moving and sinking."

John Ashby lives a few houses down the street from the corner.

"I thought it was like a bomb. It sounded like a bomb went off, ground shook," Ashby said.

When the concrete collapsed, it revealed a large 8- to 10-foot deep hole.

A wrecker hooked up to the heavy truck, but the way it was wedged with one part on the street and one part dangling over the hole, that didn't work. Heavy machinery lifting the back didn't work either, so another wrecker was called in to help, and that did the trick.

City crews will work to determine why the ground eroded under the street.

Thomas said he is glad no one was hurt and hopes the rest of the week goes much better than his Monday.

"It happens, I guess, but it is hard to believe," Thomas said.

The hole under the concrete could have been there for some time. Crews said there weren't any water leaks they knew of in the area.