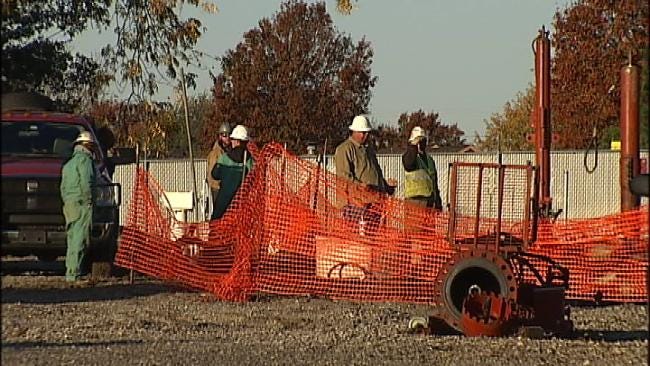 Tulsa residents were evacuated from an area surrounding a high-pressure natural gas rupture near 89th and Memorial early Monday morning.

It was so loud it could be heard miles away.

"It was a high pressure line. It was dumping a lot of gas into the atmosphere," said Tulsa Fire Chief Stan May.

It was coming from a natural gas relief station, just behind the Stein Mart at 91st and Memorial.

"I honestly wondered if there had been a plane crash somewhere," said Amanda Josserand, who lives only a few blocks away.

She and her family, including rambunctious little Campbell, were jarred out of their sleep by the piercing sound. She said she thought it was a jet airplane.

"It was like that on steroids, parked in the front street," Josserand said.

She said she ran outside to see what was happening and noticed most of her neighbors doing the same.

"Everyone just looked at each other. Nobody was panicked, by any means, but you could tell everyone was confused," Josserand said.

But despite the seriousness of the situation, they said they don't think the residents were in danger.

Natural gas doesn't have an odor, so a chemical is added to it to make it easier to detect a leak, and it's that chemical that we smell. In addition, natural gas is lighter than air, so it fades away once it hits the atmosphere.

Josserand was able to get back in her home after only a few hours. She even had a friend stop by to make sure her family was alright.

"It was just a roaring noise, it was so loud," Josserand said.

The valve has been sent to the manufacturer to see if they can figure out what went wrong.