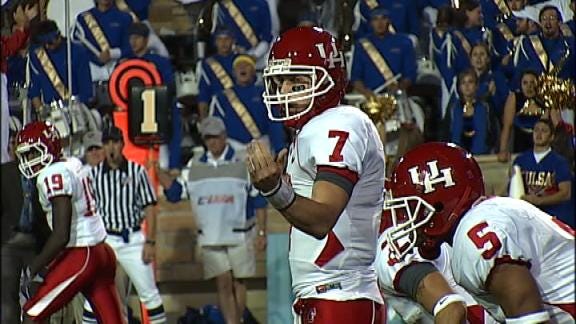 The Tulsa Golden Hurricane is 7-2 overall and 5-0 in Conference USA play; but for all intents and purposes, its season starts in Saturday's rivalry game at Houston.

Tulsa may be unbeaten in C-USA so far, but it's the two nonconference losses this season that stand out the most. Both the season-opener at Iowa State and last week's trip to Arkansas were right there for the Hurricane's taking, but both resulted in tough defeats. With wins in those games, TU would be well on its way to a BCS birth, but instead the Hurricane must turn its focus to winning the conference.

TU's three toughest conference games just happen to be the final three (Houston, UCF, SMU) and if the Hurricane can win two of them, they'll be on their way to the title game.

Since 2005, either TU or Houston has represented the west division in the C-USA title game every season except one. These two teams have been the face of the west in that time period, but it's been Houston that has held the head-to-head advantage. The Cougars are 5-2 against Tulsa since that 2005 season (TU's first in the conference).

Perhaps the toughest of those losses for the Golden Hurricane came in last year's season-finale. Despite coming in undefeated in conference play, Tulsa got smashed 48-16 at home and had to watch Houston advance to the title game.

This year is a golden opportunity for Tulsa to turn the tables on this heated rivalry. Houston comes in at 4-5 and 3-2 in the conference, needing a win to keep its title hopes alive. A loss for Houston not only means no title game, but it also puts a big question mark on any potential bowl game.

From Houston's perspective, the formula is pretty simple. The Cougars currently sit two games back of Tulsa with three to play, so a win Saturday would move them to just one back and UH would hold the tiebreaker. Keep in mind, Tulsa still has to play UCF, which could very easily be a loss, so the Cougs' hopes are very much alive if they can win this game.

Houston may have a losing record, but don't blame the offense. The Cougars aren't quite as potent as last season, but are still putting up impressive numbers. UH is sixth in the country in passing yards with 340 per game and No. 41 in points per game with 33.4.

The defense has been a much different story. When looking at their wins and losses, one stat jumps off the page. In its five losses, Houston has allowed 48.6 points per game, while in its four wins just 21.7 points per. First-year coach Tony Levine truly has no idea what he's going to get from his defense.

Tulsa's best strategy Saturday will be to play its own game. A heavy dose of the running game while completing short and timely passes will keep that strong Houston offense off the field and wear down an already poor Cougar defense.

The list of what not to do starts with three-and-outs and turnovers. Houston's offense has the capability to put up points in a hurry, so TU's got to avoid helping them out with any mistakes.

The Golden Hurricane is 1-2 in statement games this season, finding a way to beat Fresno State at home but losing their two road opportunities. The rest of their wins have been against clearly inferior opponents, (no slight on Tulsa, it's just the way the schedule worked out) so we're going to find out Saturday if this squad has what it takes to overcome a tough team on the road.

Tulsa's got the better team this season, but Houston has plenty to play for and will be playing at home. I see a close game with Tulsa making the crucial play late.