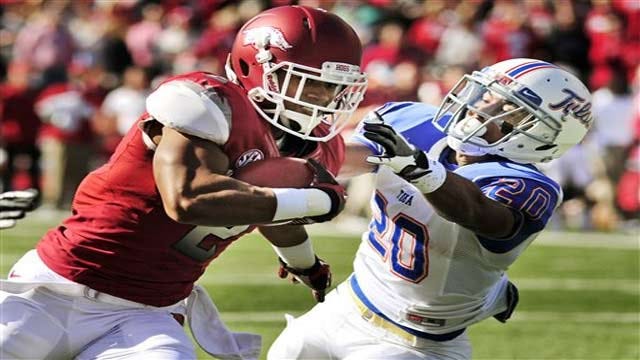 The cleaning crew at Razorback Stadium will have plenty to pick up, because Tulsa left points all over the field in its 19-15 loss to Arkansas.

Two missed extra points, a missed field goal, a blown call and an empty trip inside the 10 yard line combined to doom the Golden Hurricane Saturday afternoon in Fayetteville.

Arkansas shot out of the gate with a 75-yard drive that ended with Dennis Johnson's eight-yard touchdown run to lead 7-0. TU answered right back with an impressive drive of its own, but Daniel Schwarz missed a 42-yard field goal well to the right.

After a Zach Hocker field goal made it 10-0 Arkansas, Tulsa needed to answer; and it did. TU put together a long drive that ended with a 22-yard Schwarz field goal, but a roughing-the-kicker call on Arkansas gave the Hurricane a first down at the two yard line. The drive ended in familiar fashion when Alex Singleton dove into the end zone from a yard away, cutting the Razorbacks' lead to 10-6 after Schwarz missed the point.

Tulsa trailed 13-6 later in the second quarter when Trey Watts took a handoff and dashed 29 yards to the house, pulling the Hurricane within one point after Schwarz' extra point was blocked.

With less than three minutes left in the half, Tyler Wilson was intercepted by Dexter McCoil at the Tulsa 44. TU appeared to take full advantage when Cody Green went deep to Keyarris Garrett for a huge gain into the Hogs' red zone, but the officials called Garrett for offensive pass interference (replays showed there was clearly no interference), negating the big play and ending Tulsa's scoring threat.

The second half began with a Tulsa 3-and-out and another long Arkansas drive, but once again, TU stepped up. Mitchell Osborne stripped UA's Julian Horton of the ball and Marco Nelson recovered and returned it 32 yards to the Arkansas 45. Tulsa cashed in when Schwarz got back on track by drilling a 29-yard field goal, putting the Hurricane up 15-13.

Momentum was clearly on the side of the Golden Hurricane and it felt as though TU was one play away from taking complete control. Right on cue, Cody Green dumped a pass off to Trey Watts, who proceeded to take it 45 yards all the way to the five.

That's when Arkansas' defense made the game-changing stand, holding TU out of the end zone three-straight plays, forcing the Hurricane into a tough decision on fourth down. TU elected to bypass the field goal and go for the end zone, but Green's pass was batted down at the line and the Hurricane squandered another golden opportunity for points.

Arkansas finally re-took the lead in the fourth quarter when Johnson scored his second touchdown of the day, this time pounding it in from one yard out, giving the Hogs the 19-15 lead.

TU found itself locked into a tight battle late in the fourth quarter; a familiar scenario for this squad. Tulsa has made a living this season on making the big play late in games, squeaking out tight victories over Fresno State, UAB, Marshall and Rice, but there was no magic this time.

The loss has no effect on the Conference USA title race, but Cody Green knows it will sting nevertheless.

"We thought we had it, so it will sit bad in our stomach for a while," Green said. "We wanted it, but know we have to live with it. It hurts worse because we got down into the red zone and we didn't get points. We have to put points on the board down there."

"I love the way our team competes and plays, and it sticks in your gut because I felt that we should have won."

The Hurricane will need to get over this one quickly as they must prepare for a trip to Houston next Saturday. A win over the Cougars will not only give Tulsa revenge for last season, but also eliminate Houston from C-USA title contention.