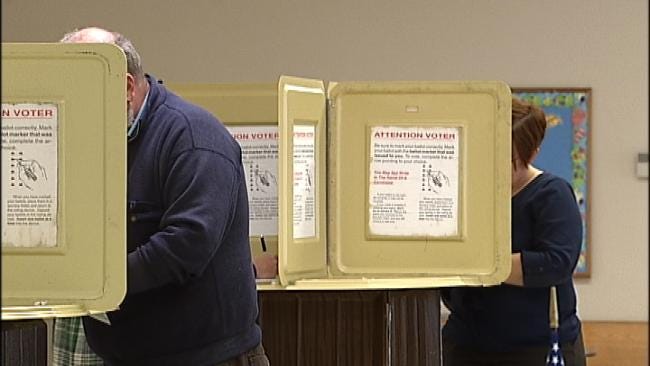 Oklahoma voters decided more than just who will represent them in the White House and Congress when they go to the polls on November 6, 2012. They approved the passage of six state questions.

Read a description of each question taken from the web site of the Oklahoma State Election Board:

This measure amends the State Constitution. It amends Section 8B of Article 10.

The measure deals with real property taxes also called ad valorem taxes. These taxes are based on several factors. One factor is the fair cash value of the property.

This measure adds a new section to the State Constitution. It adds Section 36 to Article II.

The measure deals with three areas of government action. These areas are employment, education and contracting. In these areas, the measure does not allow affirmative action programs. Affirmative action programs give preferred treatment based on race, color or gender. They also give preferred treatment based on ethnicity or national origin. Discrimination on these bases is also not permitted.

The measure permits affirmative action in three instances.
1. When gender is a bonafide qualification, it is allowed.
2. Existing court orders and consent decrees that require preferred treatment will continue and can be followed.
3. Affirmative action is allowed when needed to keep or obtain federal funds.

The measure applies only to actions taken after its approval by the people.

This measure amends Section 10 of Article 6 of the Oklahoma Constitution.

The measure authorizes the Pardon and Parole Board to recommend to the Governor, but not to itself grant, parole for persons convicted of certain offenses, specifically those offenses identified by law as crimes for which persons are required to serve not less than eighty-five percent of their sentence prior to being considered for parole and those designated by the Legislature as exceptions to nonviolent offenses.

This measure amends the Oklahoma Constitution. It adds a new Section 39A to Article 10.

It would allow the Oklahoma Water Resources Board to issue bonds. Any bonds issued would be used to provide a reserve fund for the Board. The fund would be a reserve fund for certain water resource and sewage treatment funding programs. The fund could only be used to pay other bonds and obligations for the funding programs. The bonds could only be issued after other monies and sources are use for repayment. The bonds would be general obligation bonds. Not more than Three Hundred Million Dollars worth of bonds could be issued. The Legislature would provide the monies to pay for the bonds.

The measure amends the Oklahoma Constitution.

Under the measure, the Legislature and the people by initiative petition retain the power to adopt legislation for these purposes.

This measure amends Section 6A of Article 10 of the Oklahoma Constitution.

An ad valorem property tax is a tax imposed upon the value of property. Intangible Personal Property is property whose value is not derived from its physical attributes, but rather from what it represents or evidences.

Intangible Personal Property which is still currently taxed but would not be taxed if the measure is adopted, includes items such as:

If adopted, the measure would apply to property taxation starting with the tax year that begins on January 1, 2013.