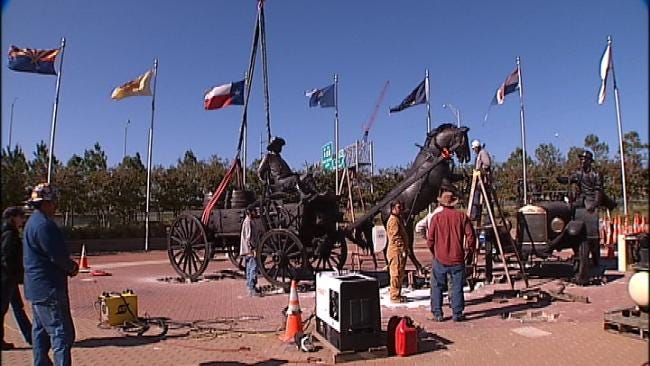 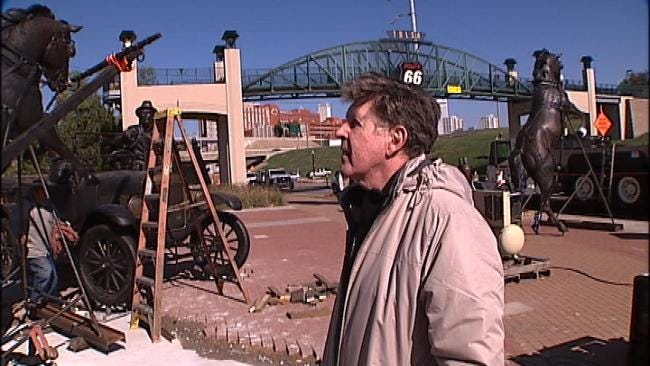 The East is meeting The West along one of America's iconic highways.

The sculpture has been in the works for nearly 10 years.

It's dedicated to Cyrus Avery, who helped create the national highway system, and it's a representation of old Oklahoma and Route 66.

With a crane overhead and all the pieces in one place, being welded into the ground, this larger than life bronze sculpture is in its final phase.

The piece is fittingly named East Meets West. It depicts Cyrus Avery in his Model T, along with his wife, daughter and her pet cat.

The artist, Robert Summers, said the Averys are stopped after pulling up on an unsuspecting oil field waggoneer and his team of horses.

It's a scenario Summers said was common in the late ‘20s.

"And the horses, especially back in that day and period, when they'd never seen an automobile, didn't know how to react when they saw those loud, smelly machines, you know?" Summers said.

Summers, of course, is proud of his masterpiece, but said there's one thing he could have done without: the family cat.

He said creating the cat's reaction to all the noise that would have been going on was difficult.

"Mr. Avery's daughters' cat, Helen, I think her name was, and they said she was inseparable to that cat, so she's got to be there," Summers said. "So, I finally said, ‘Okay.'"

But he made it work and made sure the waggoneer's faithful dog was aware of his feline friend.

"If this works out right, the little dog is over there eyeing that cat in the car," Summer said.

The sculpture installation should be finished over the weekend.