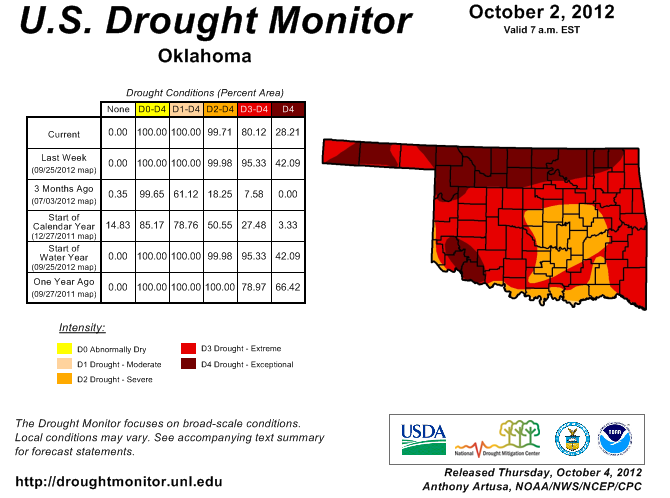 Since the searing heat of the summer, many folks have been longing for the time they can dig out those heavy jackets, step outdoors, and see their breaths. That time is arriving thanks to a powerful cold front that is bringing a shallow, but very cool air mass into the state. As I write this, the temperature is starting its tumble from 80º and may fall as much as 50º in some places before this weekend is over.

Before I get ahead of myself, I wanted to point out the significant changes we've seen on the latest Drought Monitor. Thanks to soaking rainfall over the southern two-thirds of the state, our drought situation has improved. By improved, I mean, many counties are now in a "Severe" drought whereas before, they were in an "Extreme" drought. The rains were clearly no drought-buster, but they did help out areas south of Tulsa. Pockets of 5-7" of rain fell across east-central Oklahoma with that last system. What it didn't do was bring abundant rainfall to the northern fringe of the state. That's where we've actually seen a worsening of the drought. "Exceptional" drought (the worst category) now encompasses areas from Ponca City to north of Vinita. You can check out the map above for the details. Upcoming rain chances with this cold front along with a long-term projection for wetter-than-normal conditions through mid-October will help to combat the drought further.

Our cold front at hand is first being felt in the temperature department. The rain will come a bit later. Temperatures will fall into the 50s along and north of I-44 this evening and not climb above the 50s until maybe Sunday afternoon. Our rain chances increase late tonight into Friday as a stronger low-level jet stream of winds override the cold air at the surface to create lift for showers and thunderstorms. With the colder air in place, any sizeable storm may produce some hail. While widespread heavy rain is not anticipated, we have a prolonged period of cloudy, damp weather through Saturday. The front stalls to our south, backing up the moisture over Oklahoma, which will keep us socked in with clouds and occasional rain – only making it colder outside. It will be so cold in fact, that Saturday's projected high temperature in the lower 50s will likely break the coldest high record for that date. It will be the coldest day, in fact, since February 18th! We'll flirt with record lows Sunday morning as many areas see the first frost of the season. If we see the clouds clear out in time, our first freeze could even occur. If it were to happen in Tulsa Sunday morning, it would set a record for our earliest freeze. How wild would that be if it happens on the warmest year on record?!

Fortunately for warm-weather lovers like myself (and my tomato plants), temperatures will rebound back to normal levels (mid-50s to mid 70s) early next week with plenty of sunshine. In the meantime, find your coat and prepare for an autumn chill.