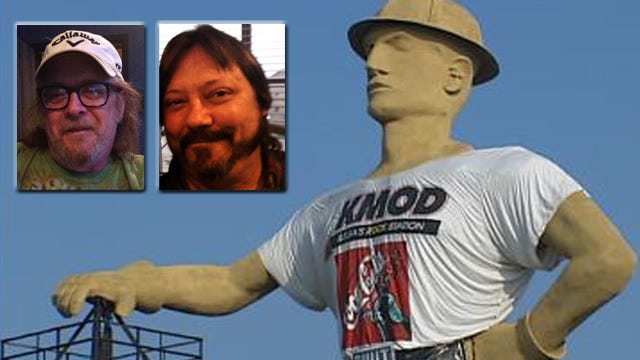 Tulsa morning radio is going to see a major change for the first time in almost three decades.

KMOD hosts Phil Stone and Brent Douglas, who created the lovable but cranky character Roy D. Mercer, have announced their reign will come to an end next month.

"Thanks for the almost 27 years you folks have let us have fun and get paid for it. Don't know what's next but I'll bet it won't compare…. Out next week, then it's a weeklong blowout after over a 1/4 of a century. Few media people get the chance to say bye, so thanks KMOD," Douglas tweeted on Thursday morning.

Douglas further clarified by saying the legendary Tulsa duo is "fading into the sunset."

Clear Channel management told News On 6, "it's fair to say that we could not reach a mutual agreement on a contract extension," and details for the new morning show will be announced soon.

"Sadness, disappointment and a huge burden to have to comment on the departure of Tulsa's most iconic morning show… ever," Operations Manager of Clear Channel Media and Entertainment Don Christi said in an email to News On 6. "Awards too numerous to mention, their universally-known character Roy D. Mercer, skits like Greek Theatre and cutting-edge humor to generations of Tulsa radio listeners cannot be measured in a simple statement or quote."

It's unclear if Roy D. Mercer, the fictional prankster voiced by Douglas, will also retire from the Tulsa airwaves. Since 1993, Roy D. Mercer has made prank calls to Green Country listeners, providing laughs during the morning drive.

Several Roy D. Mercer albums have been released on major record labels, and Douglas tweeted that a new one will be available in November.

Christi confirmed Phil and Brent will air their last show on Oct. 12.