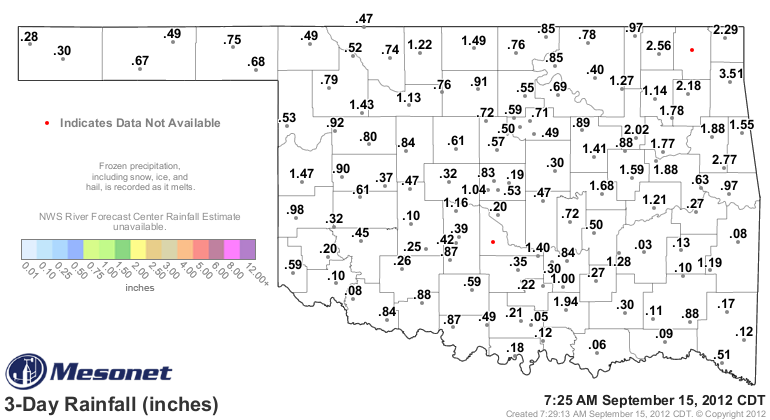 Been out of pocket for awhile. Fulfilled my civic duty with jury duty the week of Labor Day, then left for a fishing trip to the Rainy Lake area near International Falls, Mn last weekend into this past week. Will have some photos on air this evening and tonight and will try to post them on FaceBook as well. Many thanks to Mike Grogan and the rest of the gang for filling in for me.

Got back just in time to enjoy the nice rain and cooler weather. Speaking of rainfall, the map on the right shows the rainfall totals across the state over the last 3 days from the Mesonet rain gauge network. That will put a nice dent in the drought situation although much more is certainly needed, particularly for the more western counties.

As for today, the cloudy skies will make it look like rain, but not much more than an occasional sprinkle or some light drizzle is expected for most of us. Most of what measurable rainfall occurs will be in the more eastern counties. However, the lack of sunshine will keep temperatures in check with daytime highs struggling to reach the 70 degree mark for most locations.

Our winds will be on the light side and from a general easterly component for today and tonight. With the nearly saturated air in place, temperatures tonight will hold in the lower 60s again along with a low cloud deck or fog. As that burns off during the morning hours we expect to see enough afternoon sunshine for daytime temperatures to make it to around 80 along with a light SE wind.

Monday will see another cool front arriving, most likely late in the day, perhaps not until after dark. Southerly winds and partly cloudy skies in advance of the boundary should produce daytime highs in the low-mid 80s. Right now, this does not look like a big rainmaker for us so will keep the rain chances at 20% when the front moves through, but that is certainly subject to change.

Brisk northerly winds behind the boundary will produce another nice cool down for Tuesday with morning lows in the 50s and daytime highs in the 70s. We should have lots of sunshine for Tue and Wed as well.

A strong N to NW flow pattern aloft makes it difficult to time systems coming our way beyond about 4 or 5 days so the latter part of the coming week has more uncertainty than usual. Right now it looks like another front should be arriving along about Friday with at least a chance of showers/storms followed by another cool down, but there is not a lot of confidence in the timing of those system during that time frame.