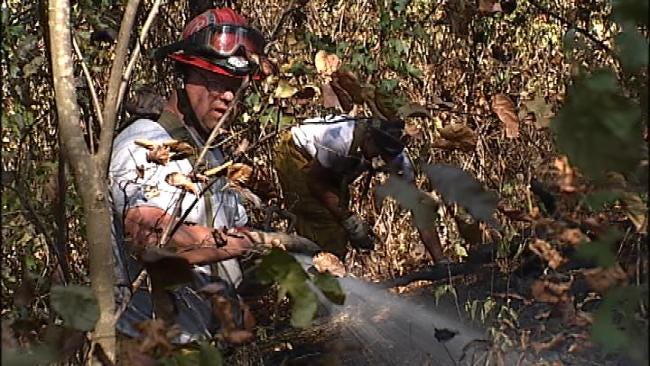 The grants are targeted at Oklahoma's smallest communities and fire departments in the most desperate need of money.

If divided equally, each rural fire department would get less than $4,500 dollars.

While that money will help, it may not be enough for some of the rural departments that say they've already burned through their budget for the year.

Some of the departments work off as little as $4,000 a year.

In the past week, firefighters in some areas have worked their equipment so hard that their budget for the year has already dried up.

From temperamental trucks to a fire that just won't go away, firefighters are at their wits end.

"[It's a] living hell, this fire that we've just dealt with. None of us in our area has never seen anything like it," Drumright Fire Chief Wade Guyer said.

Drumright firefighters, like so many others, have worked around the clock for nearly a week to put out the flames.

The fires were so fierce, there was no way to fight them without the help of rural volunteer fire departments and neighboring counties.

"There's no other way to explain it. We band together, when the call goes out everybody comes together and we all go fight this fire as one," Guyer said.

But those smaller departments have very little cash flow, their equipment and trucks are older, and the fires in the past week have taken a toll.

Blackburn, near Cleveland, for instance, is without a truck and broke.

"It makes it hard on us. We're doing it all by hand and foot. Rakes, blowers—it's what we're using to fight fires if something happens in our area, so we're using our own personal vehicles to go to the fires," Chief Martin Pace said.

It's the same story for the northeast Lincoln County fire department. Four of its trucks are in the shop and its budget for the year matches the price tag for repairs.

So now these departments are looking to the communities they defended, hoping for any bit of help to continue the fight.

The smaller and volunteer departments are in need of money more than anything else.

You can mail your donations to any of those stations or drop them off in person, but there will also be a benefit fundraiser for local fire departments this weekend in the Olive School cafeteria.

People interested in donating can also mail their donations to: