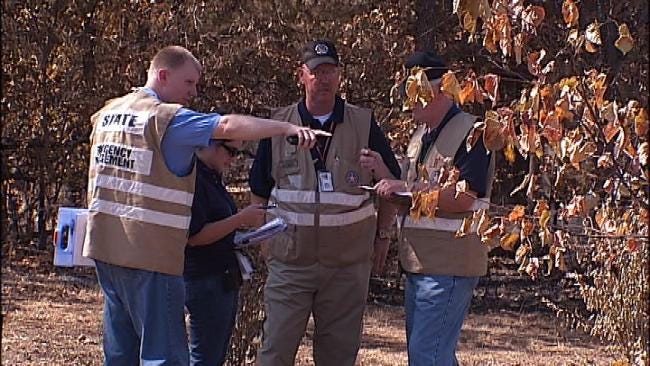 According to Oklahoma Forestry Services officials on Thursday, the official tally of acres burned in last week's wildfires is 58,500.

The Federal Management Emergency Agency also began its assessment of the disaster-ridden county on Thursday. FEMA, along with the Small Business Administration and the Oklahoma Department of Emergency Management, will visit every house or building burned in the fire.

A determination will be made into the extent of damage to each piece of property and whether the property owner will be eligible for federal aid.

As reported earlier this week, the fires encompassed 90 square miles and engulfed at least 209 homes. Many other homes received damage in the fires, and numbers regarding total damage to structures are forthcoming.

"Honestly, the federal government won't give you any assistance until you can show that your insurance company has been contacted, and they will provide whatever level of help that they can," emergency management official Jerry Lojka said. "Above and beyond that, whether you're uninsured or under insured, will depend on how much federal aid you will get."

FEMA is not sure how long it will take to go through the county. The wildfire covered such a large, rural area that it could take some time for the assessment teams to look at every piece of property.

"From a logistical standpoint, it might take a little longer to do assessments, because this is not an urban area where you might have a hundred homes destroyed in a four-block radius," FEMA's Ray Perez said. "Here, we're going to cover many miles."

Oklahoma Gov. Mary Fallin on Sunday declared the area a disaster and requested federal assistance. FEMA said there's no timeframe for when or if any money would make to Oklahoma.

FEMA emphasized assessment is the first step in a long process. It could take as little as a few days or as long as a few months, it all depends on how long it takes for evaluations, which would have to be done before Fallin could get the official request on the President's desk.

Also announced Thursday, the unified command structure of the fire response ends at 10 p.m., when control will be transferring from the more than 30 mutual aid agencies back to local departments.

Fire crews continue to monitor the perimeter of the fire area and look for hot spots, and officials are warning residents to look out for debris and emergency vehicles on rural roads.