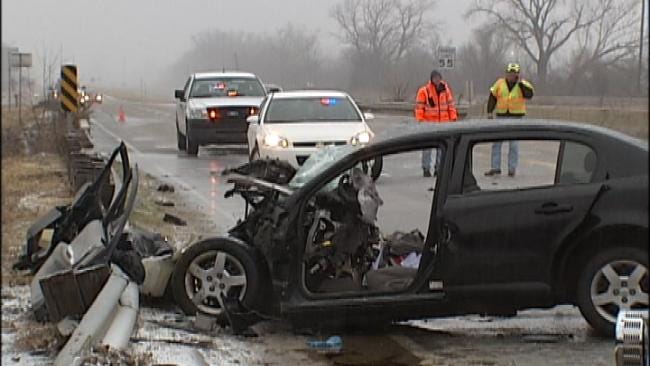 Wade Jameson was speeding without a license and with marijuana in his car on Christmas Eve, 2009, when he crossed the center line on old highway 51 in Sand Springs.

Michael and Angela Mulanax and their son, James, were all killed.

Jameson was given 24 years in prison, but goes before a judge Friday, hoping to get his sentence reduced.

Jameson's family and friends say he was only 20 at the time and deserves a second chance.

But the Mulanax family says he made the choices, so he must suffer the consequences.

Linda Perkins made a memory book of her daughter, son-in-law and grandson for the judge to review.

Angela was a stay-at-home mom, Michael worked for the city of Sand Springs, and James was their oldest.

They had been at the in-laws exchanging Christmas presents and were on their way home, so Angela could start fixing Christmas dinner when they were killed.

Wade Jameson was driving without a license, passing on the wrong side, going 70 mph in his hummer, on a highway that was slick, as a blizzard was about to move in.

He crossed into their lane and hit them head on.

"Do I think Mr. Jameson intended or planned to kill our kids that day? No," Perkins said. "Do I think he was going to kill someone that day? It was inevitable."

Jameson was sentenced to 24 years in prison for three counts of manslaughter. Because he pled guilty, that means he gets to have his sentence reviewed after one year. That year is now up.

"It's not a matter of vengeance; it's a matter of justice. Their lives mattered," Perkins said.

In the pre-sentence report, Jameson said, in part, "This accident has caused me to attempt suicide. … I don't feel any words can truly express the amount of guilt, shame and pain this has caused me. If my heart were not a muscle and could actually break, it would be shattered. No words will ever express how truly sorry and apologetic I am for this happening."

The Mulanax family said none of that changes the fact three people are dead.

"They were wonderful people who were not doing anything but going home," Perkins said.

According to Jameson's prison record for the past year, he completed two courses: a life skills program and one called, "Thinking for a Change."

But he also had the prison's highest level of misconduct issued against him in May for being involved in a fight.

The department of corrections recommends Jameson's sentence not be changed.

He goes before the judge Friday morning.