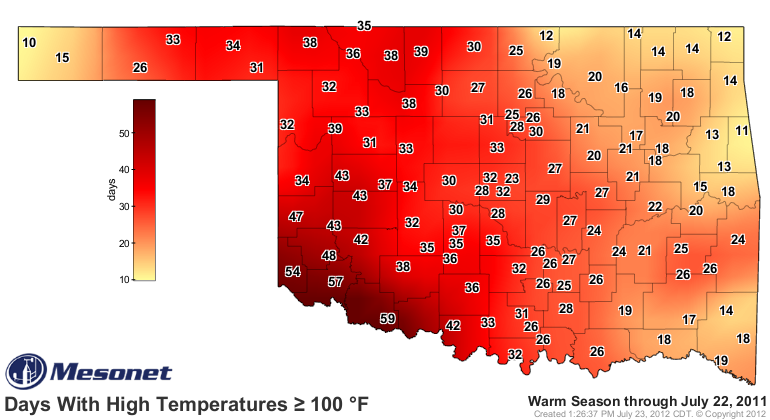 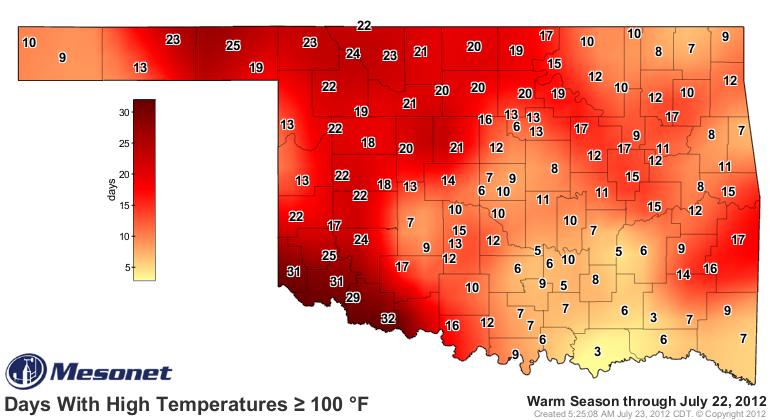 The two maps on the right, courtesy of the OK Mesonet, provide an interesting comparison of this summer and last summer. Each map shows the number of triple digit days through yesterday with last summer on top and this summer on the bottom. As miserably hot as this summer has been, it is still a far cry from what was experienced last summer…..in the for what it's worth department.

Unfortunately, our current heat wave is likely to continue although there is some hope for at least a few showers/storms later this week. With just a few more clouds in the sky today, that kept temperatures from getting much above 100 this afternoon and that should be the case again on Tuesday. However, we are not getting much relief at night with overnight lows only dropping into the mid-upper 70s at most locations and near 80 for the urban environment. That will be the case again on Tuesday and Wednesday with triple digit heat during the afternoons and a very warm start each morning.

Thursday into the day Friday has the potential for at least a brief break. Conditions aloft will be changing just enough for a weakness to develop in the dominant upper level ridge. That means somewhat cooler temperatures aloft which also translates into a somewhat more unstable environment which will allow for at least a chance of some showers/storms for the Thursday/Friday time frame. This will certainly not be a drought breaking scenario, but at least some lucky folks should get a brief downpour. Also, the extra cloud cover should keep temperatures below triple digits for a day or two.

Not for long though as the longer range guidance supports the upper level ridge to build back over the state which will pretty much eliminate our rain chances and quickly return triple digit heat. In fact, triple digits look to be a good bet for much of next week although there is some hope of a pattern change after the first week of August. Not going to get too excited about that just yet as a lot can happen between now and then, but at least the possibility is out there.

In the meantime, stay tuned, stay cool, and check back for updates.