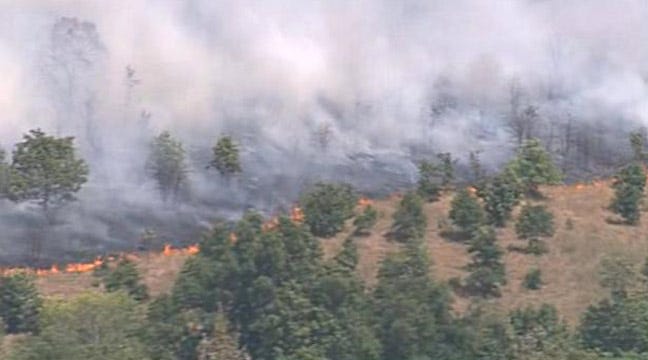 A fire northwest of Bristow is proving to be deadly, but it's not the flames that are taking people's lives.

The Oklahoma Highway Patrol was forced to shut down the highway, as a plume of smoke made it difficult to see the road ahead.

Firefighters are battling an intense grass fire that started Friday.

So far, the flames have threatened about six homes and engulfed a barn.

Judy Powell owns around 700 acres of land that are in the fire's path.

Like many others, she was forced to turn around on Highway 16.

In the past two days, OHP has had to shut down parts of the highway.

On Sunday, 68-year-old Janey Wellington was driving a mini-van, when OHP says she abruptly slowed to turn left into a private driveway.

The van was hit by an Olive Fire Department truck that was trying to pass.

Wellington and her passenger, 72-year-old Tony Hammock, were pronounced dead at the scene.

"There's been so many fire trucks, pickups, utility trucks, everything coming through that it's really better not to have that traffic coming through," Powell said.

And Monday, OHP says a Drumright fire truck was backing up onto Highway 16 when the driver hit a pickup truck.

Although it was a minor accident, OHP shut down the highway for a few hours until the thick smoke could clear.

Crews from Drumright, Olive, Bristow, Keifer and Sapulpa are all battling the fire.