Comparison of the Dust Bowl Years and Our Current Drought. 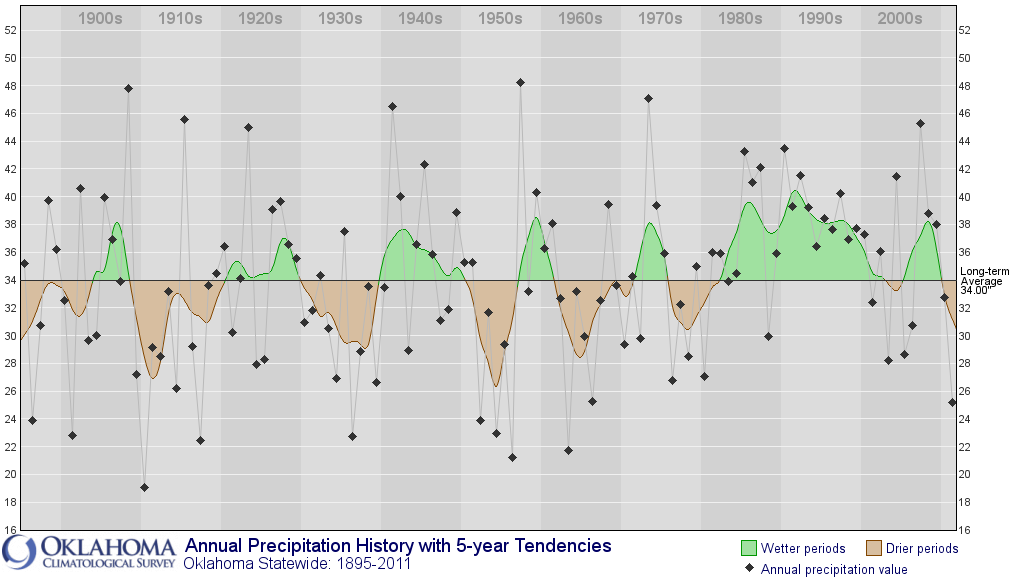 In the comment section of a recent blog, the question was asked about the similarities of this year's drought and the dust bowl years and if we were going to have another dust bowl type drought. The chart on the right, courtesy of the OK Mesonet, provides an answer to the first part of the question. Each of the data points on the chart is the statewide averaged precipitation for that year. The horizontal line is the normal statewide precipitation for the period of record which goes back to 1895. The wavy line is the 5 year running average which smooths out the large year to year variations over a 5 year period and makes the relatively wet periods and dry periods stand out more readily. The wet periods and the dry periods are also highlighted by the green and brown coloring respectively.

So, what can we learn from all this. In the first place, it should be apparent that, historically, our state has alternated between drought and wetness about every other decade. For example, relatively speaking the 1910s were dry, the 1920s wet, the 1930s were dry, the 1940s wet, etc…. In fact, if you examine the chart closely, you will see that the drought of the 1950s was actually more severe than the dust bowl years of the 1930s. The impacts were not as severe though due to improved farming practices and better technology by the 1950s.

Of perhaps greatest interest though is the long lasting, relatively wet period that basically began about 1980. Notice there is no comparable period like that in our admittedly brief, historical record. We did have a brief drought in the early part of this century and obviously the dryness of the last couple of years is starting to show up. So, the similarities of the last two years and the dust bowl years are minimal; at least, so far in that our current drought has not yet exhibited the staying power of what occurred in the 1930s. However, of perhaps greater significance is that, historically, we are long overdue for a long lasting, significant drought in Oklahoma. The fact that we have not really had one since the 1970s is in itself remarkable and we should not be surprised that apparently, the law of averages may be catching up with us.

Now, for the second part of the question that was asked. Does this mean we are headed for another dust bowl type situation? From a weather forecasting perspective, that question cannot be answered with a simple yes or no. These long term trends are an area of active research, but we cannot presently provide a definitive answer to those type of questions.

Hopefully, this discussion has provided some context to what we are currently dealing with. As far as the short term forecast is concerned, the coming week will see a continuation of the current heat wave with much above normal temperatures. There is a glimmer of hope for a few showers/storms late in the week which may at least keep us below triple digits for a couple of days. And obviously, our current drought situation will continue through this forecast period.

In the meantime, stay tuned, stay cool, and check back for updates.

Comparison of the Dust Bowl Years and Our Current Drought.