Break in the Heat, Chance of Rain. 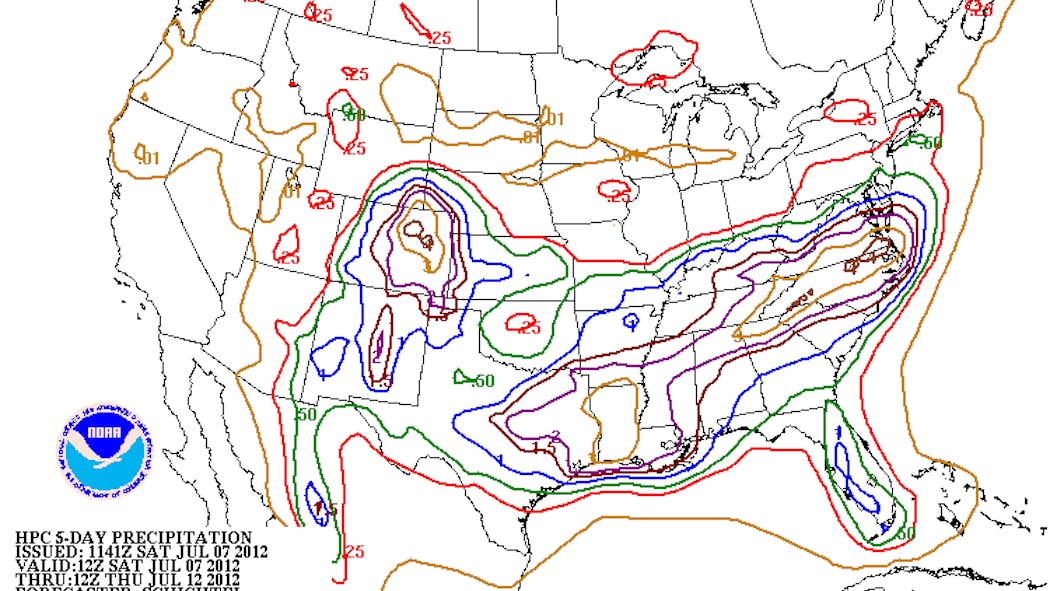 The map on the right is an updated QPF map valid through Thursday morning. Notice that much of the drought sections of the country have a good shot at receiving some badly needed rainfall, including here in E OK. Keep in mind, this does not mean that there will be that much rainfall everywhere; just that the areal average shown on the map should reach those amounts. As always, there will be some locations that will receive much more than that and others that will miss out altogether. Such is the nature of our summer-time scattered showers/storms.

As far as the chances of any one location receiving measurable rainfall are concerned, keep in mind that is the product of two other percentages. The percentage chance of any rain anywhere in the forecast area and the percentage of the area that receives rain. In this case, we have a 100% chance that it will rain somewhere in the forecast area each day through Monday. However, it is not expected to rain everywhere each day and the areal coverage looks to be on the order of 30% today, 40% Sunday, and 50% Monday. So the product of 100% and 30% gives a 30% chance of any one location here in E OK receiving measurable rainfall today and the same procedure applies to Sunday and Monday.

At least we have a chance and as mentioned, there will be some locations that will get a good soaking with an inch or more certainly possible. Those showers/storms that do form will move relatively slowly and therefore will produce locally heavy rainfall for a short period of time. Strong, gusty winds and potentially some small hail will also accompany the heavier storms. If you catch one of those, count your blessings.

One benefit we will all receive though is a break in the heat wave. Temperatures today are a tough call as there will be more cloud cover, but we got off to such a warm start we should still be pushing triple digits at most locations. More clouds on Sunday and a greater coverage to showers/storms should hold us into the 90s during the day and a cool front will arrive by early Monday. The frontal boundary will eventually stall out along or just south of the Red River by later in the week. The more E to NE winds behind the boundary together with lingering clouds should hold daytime highs in the 80s to near 90 for the first few days of next week.

As the week wears on, most of what shower activity that is left behind will be confined to the extreme southern counties. However, we should have enough residual moisture for at least partly cloudy skies each day and temperatures that should be close to normal by the coming weekend. That translates into morning lows in the low-mid 70s and daytime highs in the lower 90s. Quite a change to this past week.