Shopping On Black Friday In Tulsa 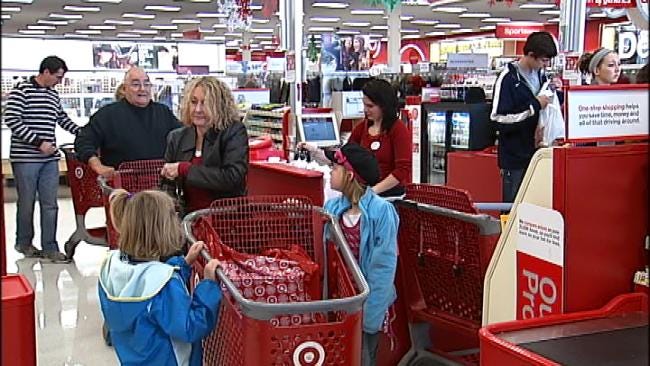 Shopping On Black Friday In Tulsa

"It is crazy!" Lenora Fielden, a Sapulpa shopper said.

And customers are cashing in on deep discounts like crazy.

"I did! I actually got the one item I came for, so I'm already doing good," said Tina Winford of Drumright.

Stores like Target have big deals on electronics, home theater products and toys.

Several bargain hunters were on their *second* round of Black Friday shopping, like Amber Thomas of Glenpool.

"It was too crazy, so we left and now we're back because we didn't need very many big things. So we're just kind of getting what we need and that's all," she said.

With unemployment high and consumer confidence low, many consumers spent part of their Thanksgiving waiting for hours to get the best deals in this difficult economy.

"It's so easy to knock it all out in one night and you save so much money in the process," Judy Stilwell said.

Many big chains opened at midnight, hoping lower prices would lure in cash-strapped customers before other retailers did.

"Last night was horrifying, today is a lot better, but it's still a madhouse," Lenora Fielden said.

But the earlier hours weren't for everybody, like Amber from McAlester.

"I didn't want to fight anybody. I didn't want to put up with crowds. I mean, it's busy here, but it's not too bad. You can still get around and move - everyone is pretty friendly," she said.

Best Buy had people camping out earlier than ever this year -- which has meant tons of traffic.

"We had people who were out over the night, we have people who are just now getting out to do some of their holiday shopping, so we're going to have a continued heavy stream of traffic coming through today," said Lindsay Heimdale of Best Buy.

And for many shoppers, today is as much about the experience as it is about the deals.

For those who don't like the crowds, you can do your shopping at home through Cyber Monday.