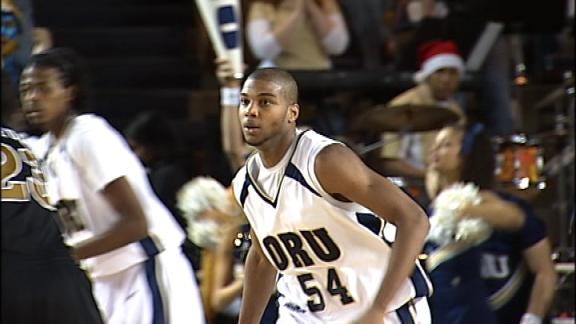 The Oral Roberts men's basketball team finished the preseason by squeaking past Northeastern State 65-59 Sunday at the Mabee Center.

The Golden Eagles started the game slow, allowing Northeastern State to start the game on a 9-2 run before ORU recorded a field goal. The teams went back and forth for most of the first half before ORU pulled away for a 37-29 halftime lead.

Northeast State fought back to tie the game 54-54, but the Eagles responded with an 11-2 to retake the lead. They did not surrender it for the rest of the night.

Steven Roundtree led ORU, especially in the second half. He had nine points and 11 rebounds after halftime and finished with a game-high 17 points. Michael Craion added his second consecutive double-double with 12 points and 14 rebounds.

Justin Johnson led Northeastern State with 15 points and went 4-for-4 from beyond the 3-point line. The Riverhawks as a team shot 9-of-19 from long range.

The victory ended exhibition play for the Eagles, who were much more dominant in a 78-45 win over Rogers State in their first game. They will begin the regular season on the road at 8 p.m. Friday against West Virginia.