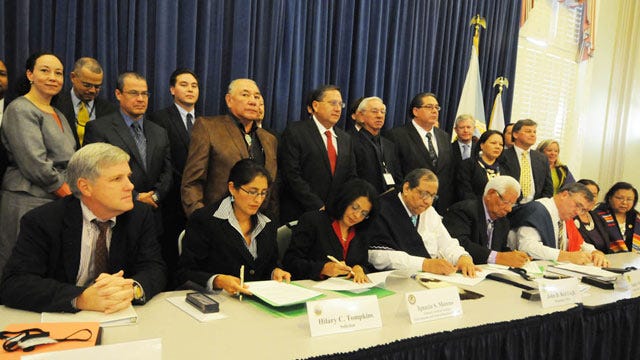 WASHINGTON -- The Obama administration is paying $380 million to settle a lawsuit brought by the Osage Nation over mismanagement of its trust assets.

The settlement ends a 12-year dispute over the Interior Department's accounting and management of the Osage Tribe's trust assets, including valuable oil and gas property. The settlement compensates the tribe for historical losses to its trust funds, plus interest.

The Justice Department says Osage Tribe Principal Chief John Red Eagle and other tribal officials commemorated the settlement during a ceremony Friday at the Interior Department's Washington headquarters. The agreement was executed October 14, 2011.

The Osage Tribe brought its trust accounting and trust management lawsuits in the U.S. Court of Federal Claims (CFC) in 1999 and 2000.

Also, the tribe brought a trust accounting case in the U.S. District Court for the District of Columbia in 2004 and dismissed that case in 2010.

The CFC litigation included numerous motions, extensive discovery, many rulings, and two trials over 12 years. Between 2006 and 2010, the tribe obtained two judgments from the CFC against the United States for about $331 million on various claims spanning the 1972-2000 period.

A trial on significant claims remaining in this case was scheduled to begin in February 2012.