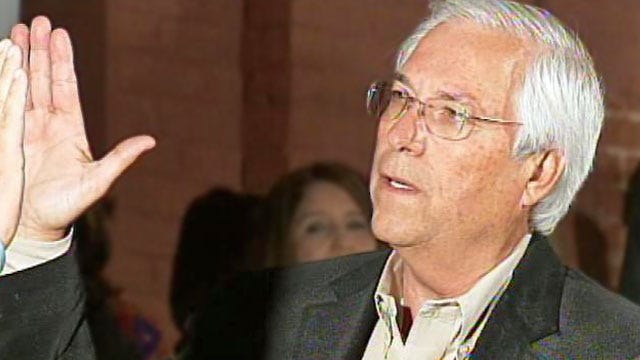 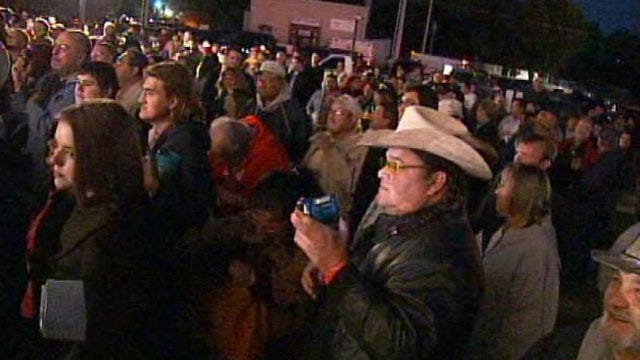 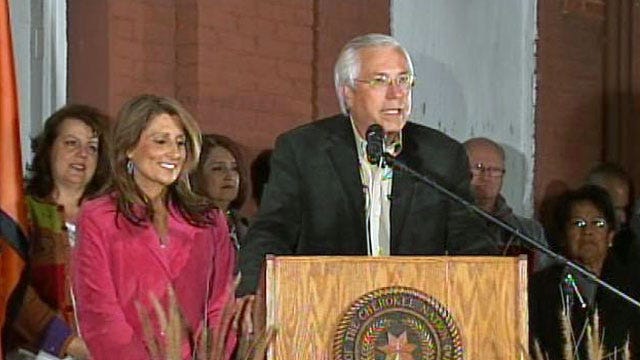 TAHLEQUAH, Oklahoma -- The Cherokee Nation has a new Principal Chief.

The Cherokee Nation Supreme Court decision came down at 1:30 p.m. Wednesday. Bill John Baker says 7:30 p.m. that same evening was the earliest he could schedule a swearing-in ceremony.

From the same courthouse steps where he fought legal challenges from his opponent, Bill John Baker addressed his supporters as Principal Chief.

"The Cherokee people have spoken and I am humbled and honored to be elected, to lead our great nation," Chief Baker told the crowd Wednesday.

A huge crowd braved falling temperatures to witness Baker's swearing-in ceremony, saying they had to see it for themselves.

"I was excited that Bill John won. We have been waiting for this a long time," said Shirley McLemore, Cherokee citizen.

"Because it's a new beginning, a new day. The dictatorship is gone," said Charlie Dry, Cherokee citizen.

Chief Baker said he wants to fight hunger, poverty and push for better education and elderly care in the nation.

"There is no time to fight each other," he said.

Smith had said it was not legal for the freedmen to vote in the special election, but the justices denied his petition.

"I was so excited. I knew there was going to be another round with him, and when I heard they denied it I was jumping up and down at work," Marilyn McDowell, Cherokee Freedman.

Chad Smith attended the ceremony and offered to help Baker in anyway. He says the only thing he regrets is the negative campaigning.

"I'm very thankful to the Cherokee people for my 12 years I was able to serve them," Smith said.

"Bless each and every one of you and God bless the Cherokee Nation," Baker told the crowd.

Chief Baker gets to work first thing tomorrow morning. He says to expect some announcements over the coming week as he starts to assemble his administration.

The ceremonial inauguration and celebration is still set for November 6, 2011 at 2 p.m. at Sequoyah High School.