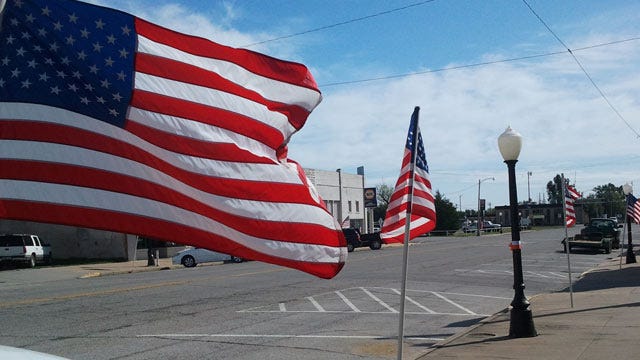 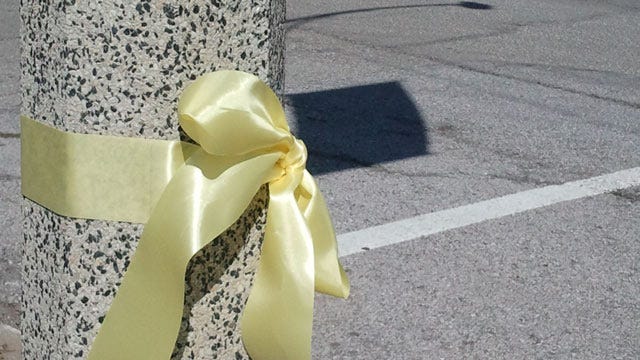 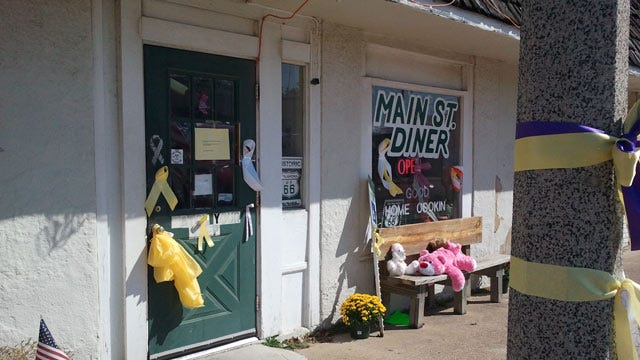 CHELSEA, Oklahoma -- Everywhere you look in downtown Chelsea, there are signs of support for an airman whose wife and 8-year-old daughter died in a car crash on October 14, 2011.

Donald Ramsey was away serving in Iraq.

All over Chelsea's downtown, American flags are flying. Ribbons are hanging on light poles and stop signs.

Friends and neighbors hope their show of compassion gives the family at least some comfort.

Everyone had hoped Donald Ramsey's return home would be a joyous occasion, but it's a terrible tragedy that brings him from Iraq. Ramsey's wife Christy and 8-year-old daughter Josie were killed in a car wreck.

Hefner is a neighbor of Christy Ramsey's parents. Hefner works at an auto repair shop in Chelsea, where a ribbon is on the door and a flag is flying out front.

"Just let them know we're thinking about them, and in respect to all of them," Hefner said.

Christy and Josie Ramsey were killed in a wreck on Highway 169 in Talala Friday afternoon. They were returning home after a school field trip.

Losing a well liked neighbor and a precious child is horrible. It's even more heartbreaking that it happened when a husband and dad was serving his country in Iraq.

"Everyone I've talked to says what would we do if we were in their shoes. We just don't know. It's a sad, sad situation. All I can do is pray for the families," Hefner said.

In addition to the flags and ribbons, people have placed stuffed animals and other memorials outside the downtown Chelsea diner owned by Christy Ramsey's parents.

They're intended to show the community cares and it's hoped the family gets at least some comfort from the kindness and from the small town support from people with big hearts.

"We're all praying for them. They've just got to hang on to the Lord. That's the way I look at it. We're there for the family," Hefner said.

The funeral service for Christy and Josie Ramsey will be this Friday afternoon at 2:00 at the Chelsea High School Gym.