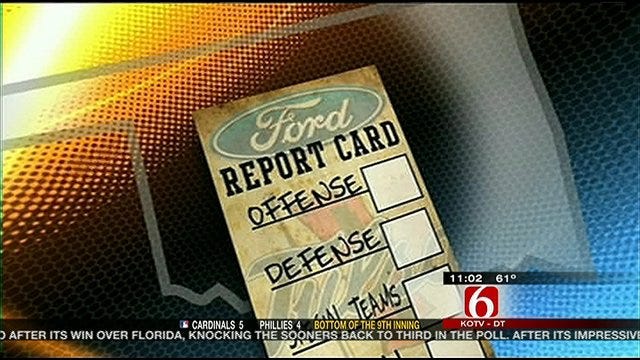 TULSA, Oklahoma – Tulsa needed a win in a big way. The team was feeling down after having lost three September games and losing a former teammate in recent days. The players sang and danced in the locker room after the 41-24 win and were all smiles in the postgame interview session.

Their quarterback set a season-high in touchdowns. The defense scored twice. The win was a dominant one. Tulsa now has a bye week to heal and prepare for a Conference USA title run.

If you blinked, you may have missed Tulsa playing offense against North Texas. The team only had the ball for 7:30 in the first half. Despite only running 28 plays in the first two quarters, the Golden Hurricane stacked up 28 points.

On its four possessions, Tulsa scored three touchdowns. Earlier this week the team kept harping on how it needed to start faster after failing to score a touchdown in the first quarter in any of its first four games. They certainly did that.

G.J. Kinne had a bounce back game from the disastrous three interception performance on the blue turf in Boise last weekend. He was sharp, throwing for 314 yards and three scores. His 49-yard hook up with Bryan Burnham got TU on the scoreboard early.

This was the unit's best performance of the year by far – even better than the win over Tulane when it only allowed three points. The final score shows that North Texas put up 24 points, but 21 of those came in the 4th quarter when the game was out of reach and the Golden Hurricane was playing mostly backup players.

Shawn Jackson and Curnelius Arnick were everywhere. The duo combined for 20 tackles. True freshman Dwight Dobbins made the first big play of the night for the defense. He jumped in front of a pass on North Texas' second possession and returned his first career interception 36 yards for his first career touchdown. It was the first collegiate start for the former Carl Albert star. Coaches have been high on him since fall camp began.

Dexter McCoil picked off a pass in the third quarter and took it back 74 yards for the team's second defensive score of the night. It's the first time Tulsa has returned two interceptions for touchdowns since last season's Hawaii Bowl win.

The most impressive stat of the night was how the team slowed down Mean Green running back Lance Dunbar. He finished the night with 127 yards rushing, but needed 40 carries to get there (3.2 yards per carry average). Last week against Indiana, he racked up 279 all-purpose yards. At one point on Saturday, Dunbar had 16 carries while Tulsa's entire team had only run 11 total plays on offense.

Tulsa's defense continues to find itself on the field A LOT. TU came into the game with the highest number of defensive snaps played in the nation at 347 (87 per game). They played another 82 snaps against the Mean Green. After the game, McCoil said they are prepared to play that many every week and embrace the challenge on the field.

Tulsa stuffed North Texas at the goal line on third and fourth downs in the first quarter to keep the Mean Green scoreless. The defensive stop fired up the sideline. They got two sacks on the night as well. The only thing to work on is limiting the big plays. North Texas had six plays of 25 or more yards on the night. Most were results of one player's coverage miscue and none of them resulted in first half points.

There were highs and lows for the special teams unit. Tulsa blocked a field goal, but also had an extra point blocked. They returned kicks well, but also gave up returns of 19 and 40 yards. The usually big-legged Kevin Fitzpatrick didn't boot a single touchback on kickoffs against North Texas. That was the first time that hadn't happened this season.

Willie Carter and Bryan Burnham continue to be big time weapons for Tulsa on offense. Young players continue to show up on defense and make big plays. After the game, players said that we should start ignoring their record. They feel like they were the best 1-3 team in that nation and that they are starting to get in a rhythm at the right time. Tulsa gets a week off now before beginning the march towards their goal of playing for a conference championship in the Liberty Bowl. They will face UAB at home on October 15th.