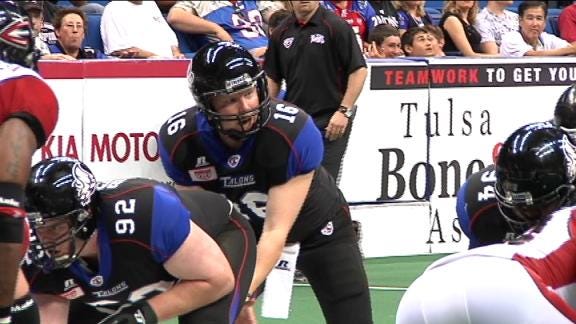 TULSA, Oklahoma -- Tulsa Talons chairman Paul Ross confirms to The News On 6 that the team will relocate to San Antonio in time for the 2012 season. The team will play in the Alamodome and be known as the San Antonio Talons.

Ross says his ownership group has been supportive of Tulsa, but ticket sales fell short of what was needed to be successful financially.

The Talons missed the playoffs last season, and paid attendance fell to approximately 5,100 fans per game. In 2010, the Talons made the playoffs, but still only drew an average of around 6,600 fans. Ross says a team needs to average around 8,500 paid fans to be financially successful in the Arena Football League.

"Not looking at just last year…but to think with the season ticket base we had—which was one of the lowest in the league—to think we could get from 6,600 to 8,500 [paid tickets], we didn't feel good enough we could do that," Ross explained.

Ross said the Talons were viable in Tulsa while a member of the af2 league, but struggled with the increasing financial commitments of the revamped AFL.

Ross cited higher player payrolls, production expenses for televising games on the NFL Network, as well as salaries for expanding staff at the league office as new factors that stretched his team's budget.

"This is a business," he said. "I think people forget that. I've been in a lot of businesses, this one is very hard—harder than I expected when we bought the team in 2003"

Ross is from Tulsa, and his local group will continue to own the majority of the team.

"We hate to leave Tulsa when you live there and enjoy going to see games yourself, but in the end, it's a business decision."

The Talons have not announced if head coach Mitch Allner and staff will make the move to San Antonio.