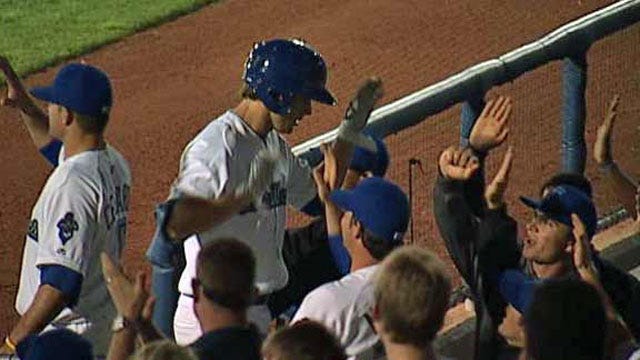 TULSA, Oklahoma – The Tulsa Drillers only scored in one inning, but that was all they needed in a 4-2 victory Friday that completed a three-game sweep over the Midland Rockhounds.

The Rockhounds (55-68) started the scoring with runs in each of the third and fourth innings to take a 2-0 lead. The score remained the same until fifth, when Midland reliever Jason Bergmann began losing control of his pitches.

After a lead-off double to start the fifth, Bergmann hit the next two batters he faced with back-to-back pitches. That suddenly loaded the bases with nobody out, and the Drillers (57-66) took advantage.

Hector Gomez connected on a single that drove home one run, and a throwing error brought the other two runners across the plate to give the Drillers their first lead. Gomez also advanced to third on the error and scored on a single by Ben Paulson in the next at-bat to extend the lead to 4-2.

The Tulsa pitchers took over from there and did not allow a runner past second base for the rest of the night. Joe Torres entered in the ninth inning and closed things out for his first save of the season.

Dan Houston (4-3) finished with a victory after scattering eight hits through five innings but only allowing two runs. His three relievers combined to hold the Rockhounds to two hits in the final four frames.

Midland starter Sonny Gray had to be pulled after 3.2 innings and finished with a no-decision. Bergmann (1-7) was credited with a loss after struggling through two innings and allowing four runs – one of them unearned – on four hits and two walks.

The Drillers dominated the entire three-game series, winning all three games by a combined score of 18-2. They will remain in Tulsa for one more series against the Frisco RoughRiders starting at 7:05 p.m. Saturday.