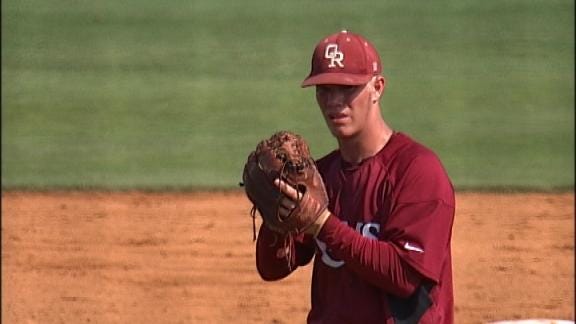 TULSA – Dylan Bundy struck out 11 and drove in five runs to lead the Owasso Rams to a 6-1 win over the Sand Springs Sandites in Bracket A of the 6A playoffs.

The game was scoreless until the fourth inning, when Bundy blasted a solo home run to give the Rams the lead. Owasso would add a run later in the inning when Cory Taylor grounded out to score Justin Steelmon.

Bundy got another RBI on a sacrifice fly in the fifth inning, but he didn’t put the game out of reach until the seventh, when he put the game on ice with a three-run home run.

Owasso advances to play the winner of Thursday night’s game between Sand Springs and Edmond Santa Fe. To advance to the state finals, Owasso needs one win on Friday while their opponent would need to defeat the Rams twice to advance.

The 6A state championship game will be played Saturday at noon at ONEOK Field in Tulsa.