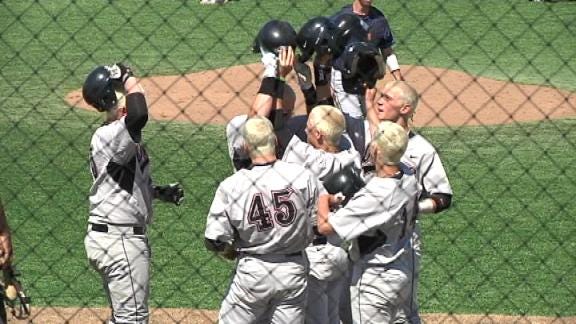 OWASSO, Oklahoma – National number one Owasso avoided an upset Wednesday, beating Bartlesville 10-5 in the first round of Regionals.

The Bruins would jump on top early, grabbing a 4-0 lead by the end of the third inning. This early success was helped by Blake Hicks’ solo homerun to left field in the third. The Rams, however, were able to answer in the top of the fourth with three runs of their own and the score was 4-3. In the bottom of the fifth, Nate Gregg’s RBI single gave the Bruins a 5-3 cushion going into what would turn out to be a tumultuous sixth inning. In the top of the frame, with the bases loaded, Owasso’s Justin Steelmon hit a ball that went over the right field fence. The ball appeared to have drifted foul, but both umpires signaled a home run. The grand slam would put the Rams up for good. In the top of the seventh, helped by a Dylan Bundy two-run blast, Owasso added three more runs to seal the 10-5 victory.

Owasso will next play Union at Owasso Thursday at 4:30 pm. That game will be a rematch of last year’s state title game (won by Union). Last Friday at ONEOK Field, Owasso beat Union 6-3.