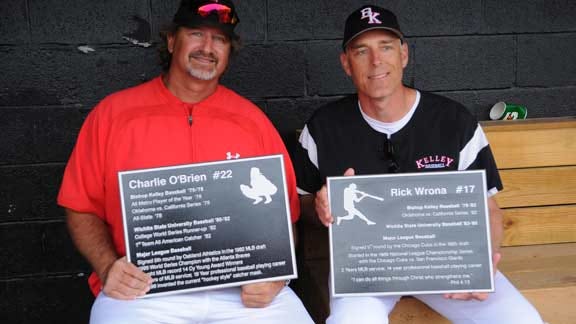 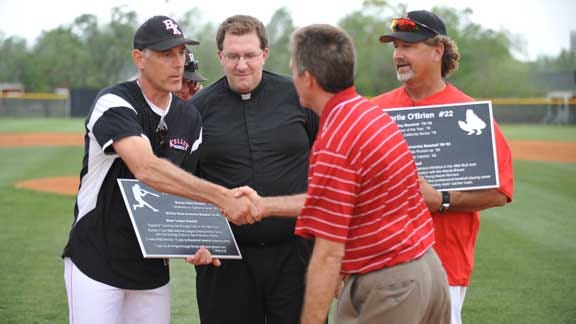 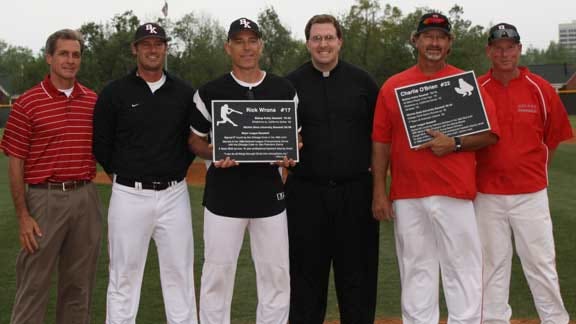 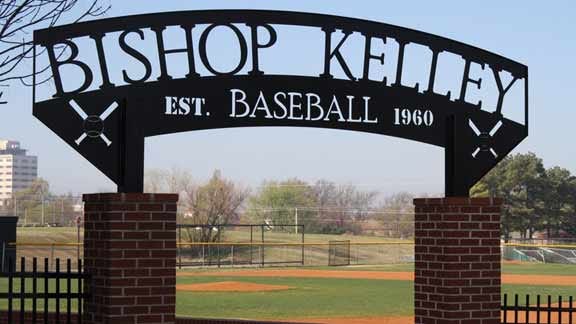 O’Brien and Wrona were presented with achievement plaques that will be permanently installed at the Comets’ field in honor of their outstanding achievements on and off the baseball field.

Both Charlie and Rick were multiple sport athletes during their high school days at Bishop Kelley, and after both found themselves playing in the major leagues.

O’Brien, who graduated in 1978, played both baseball and basketball at Bishop Kelley. He was a part of the state championship baseball teams his sophomore and senior years.

After his time with Wichita State he was drafted in the fifth round of the 1982 MLB Draft by the Oakland Athletics. All-in-all he spent 18 years playing professional ball for the Brewers, Mets, Braves and Blue Jays. In 1995 the catcher won the World Series while with the Atlanta Braves.

Charlie and Traci O'Brien's son Cameron is on the 2011 Comet roster and has signed a national letter of intent to play for Louisville. His older son Chris O'Brien (Class of 2008) currently plays for Wichita State University.

Wrona, a 1982 graduate, was also a state champion in high school, winning the 1981 football state championship. As a defensive back he was named to the First Team All Metro and First Team Tribune All City.

Rick was an All Star catcher and he played in the Oklahoma All Stars vs. California All Stars game.

In the major leagues, he played for the Chicago White Sox, Cincinnati Reds, Milwaukee Brewers, and Texas Rangers.

Wrona coaches baseball and football for his sons, Will (Class of2009), and Walt (Class of 14).

O’Brien and Wrona have both been inducted into the Bishop Kelley Athletic Hall of Fame. O’Brien was a member of the inaugural hall of fame class in 2004 while Wrona was inducted in 2009.

The Comet baseball team returns to action on the road Friday April 15 against Bishop Carroll at 4:30 p.m.