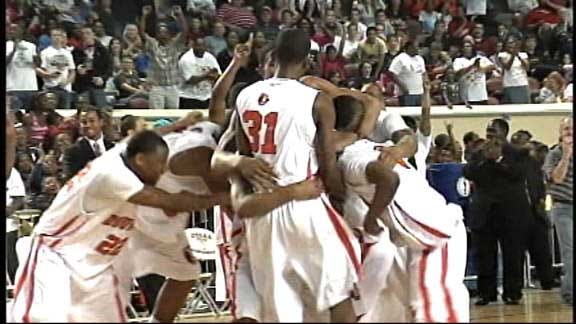 OKLAHOMA CITY -- The Douglass Trojans jumped out to a big second quarter lead and rode that momentum to a 64-52 win over the Bridge Creek Bobcats to claim their second-consecutive Gold Ball.

The game opened with plenty of fireworks from both squads, Douglass drawing first blood with a three-pointer from Dorrian Williams to start the game up three.

Bridge Creek Responded with five consecutive points, a drive and score from star Ryan Spangler and a three-pointer from senior Austen Kelley gave the Bobcats the 5-3 lead. Douglass answered with two unassisted layups from senior Devonte Smith to take a 9-7 lead.

But that’s when the Bridge Creek offense opened up and the misses mounted for Douglass.

The Trojans came up empty on four consecutive possessions, while the Bobcats scored eight consecutive, part of a 10-2 run to take a 17-11 lead.

That lead would hold until the closing seconds of the quarter when Ramond Jenkins scored underneath the basket to close the deficit to 21-18.

Spangler was clearly tired in the second quarter, and as his offensive production waned, so did the Bobcats’.

That lead held for the majority of the second quarter, but the Bobcats scored four consecutive in the closing minutes of the quarter to cut the lead to 49-40.

Trailing 51-44 two minutes in to the fourth, the Bobcats put together an 8-4 run, capped off by six consecutive from senior Jacob Bolich, to close the gap to 55-50.

But that’s when Douglass put the offense into gear to close the game. The Trojans finished the final minutes of the game on a 9-2 run, five from Smith and four from sophomore Stephen Clark to shut the door on a comeback.

Spangler, who is signed to play collegiate ball at Gonzaga, finished the with a game-high 28 points, 15 rebounds and three blocks, with Kelley adding in 15 points.

The win keeps the Trojans perfect in the state of Oklahoma for the past two seasons, their last loss coming in the 2009 state semifinals.