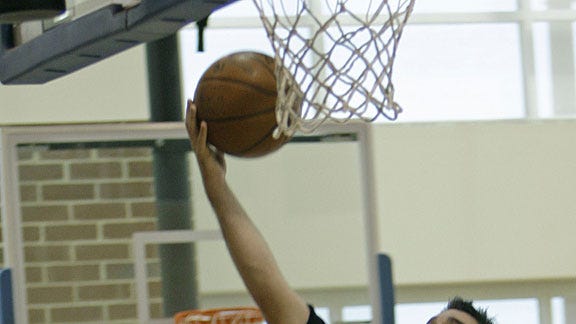 While they played hard all year, the Henryetta Knights’ season came to an end Saturday afternoon in Antlers as 3A No. 18 Eufaula made a last-second layup to win 52-50 in the consolation final of Regionals.

After a 60-42 loss to Holdenville Thursday night dropped Henryetta into the loser’s bracket, the Knights tangled with Tishomingo on Friday afternoon. Henryetta at one point had an 11-3 lead, but it was trimmed to 14-6 by the end of the first quarter. The second quarter was close, but it ended up with Henryetta holding a 25-21 halftime advantage.

The Knights broke away to a 32-23 lead, and they led 35-29 with one quarter to play. The Indians were forced to foul, and the Knights made free throws, extending their season with the 52-41 victory. Sophomore forward Blake Johnson and junior forward Joe Moudy each scored 12 points. Sophomore guard Damon Mouss had 11, sophomore forward Grant Ward nine, freshman forward Chet Caywood six and senior guard Rush Williams had two points.

That set up a win-or-go-home matchup against Eufaula for the fourth time this season and the second playoff meeting between the two 8 Star Conference foes. The Knights led 7-2 early, after one quarter their lead was 12-7. The Ironheads pieced together 12 unanswered points, but Henryetta fought back to take a 21-19 lead into halftime. The momentum seesawed back and forth as Eufaula made a 10-0 run, but Henryetta again recovered.

Eufaula led 38-35 at the end of the third quarter. The Knights came back from a six-point deficit to tie the game at 50 with 62 seconds left. As the ball was slapped away with nine seconds to go, a controversial no-call allowed Eufala the game-winning layup with 1.9 seconds left, and the Ironheads stole an extremely close one 52-50, ending Henryetta’s season.

Moudy led the Henryetta offense with 17 points, Johnson had 11, Caywood 10, Mouss three, and Williams, the only senior on the squad, made all five of his points down the stretch.

The 2010-11 Knights weren’t the tallest team out there, but they nearly always gave the other team a tough fight. They earned third place in the Okemah Tournament, and were runner up in the Okmulgee County Tournament, were 6-6 in conference play, and finished with a record of 11-12. Coach Jerry Ward’s team improved greatly from the year before, and they will be looking to continue that improvement next winter.