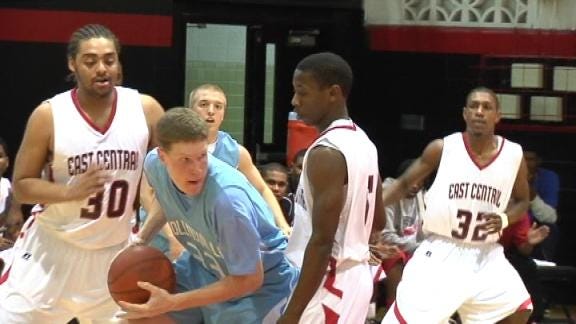 TULSA, Oklahoma – East Central proved to be the tougher Cardinals in a 72-16 win over Collinsville Friday night. East Central had very little trouble in the first round playoff matchup thanks to a balanced scoring attack and relentless defense.

East Central jumped out to an 18-0 lead thanks to some steals and fast break points. Collinsville did not score until getting a jumper to fall with 20 seconds left in the quarter.

The speed of East Central led to easy scores early in the first quarter. Collinsville’s defense couldn’t keep up with the quicker guards who penetrated the lane and dished to Drew Wilson for easy buckets. The senior used his 6-foot-7 size to his advantage in the paint to get easy dunks and hook shots over the shorter defenders.

Wilson’s inside presence forced Collinsville to condense its defense in towards the paint. He responded by kicking the ball out to wide open shooters for jump shots. The open looks for Cody Colbert and Berto Long continued to fall until East Central built a 46-5 lead heading into halftime. That duo combined for 18 first half points.

Nine different players scored for the Cardinals, but Long led East Central with 14 points. The Cardinals let off the gas in the second half and cruised to the easy win.

Collinsville tried to apply some second half pressure but the game was well over. The Cardinals did get six points from Kendal Curtis in the losing effort. Collinsville didn’t have the size or the speed to run with East Central.

With the loss, Collinsville’s season is over.

East Central improved to 14-4 this season. They advance to face Oklahoma City Southeast on Saturday night. The game will tip from East Central High School at 7 p.m.