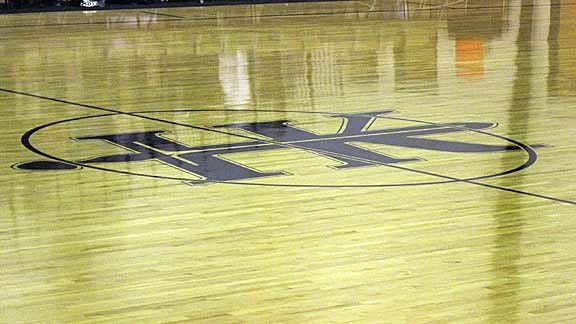 The Henryetta Knights spoiled the Kellyville Ponies’ homecoming Friday spoiling the girls game by a score of 54-44 and the boys game by a final of 55-45.

The Knights entered Friday’s matchup with Kellyville coming off a four point loss to Preston Tuesday night. Meanwhile the 3A No. 7 Lady Knights rolled into the game on a three game winning streak.

The boys took the court first and early in the game the Knights scored five points in a row to lead 7-4, but the Ponies held a slim 12-11 first quarter lead.

In the second, the gap grew to 17-13, but Henryetta took a 21-19 edge going into halftime. Kellyville self-destructed in the third quarter, which Henryetta took advantage of, leading 32-23, then 37-28. With eight minutes to play Henryetta was up 39-30.

The fourth quarter went by without much trouble, and the Knights walked out of the building with a 55-45 win. Sophomore guard Damon Mouss led the scoring with 15 points, sophomore forward Blake Johnson had 14, junior forward Joe Moudy and freshman forward Chet Caywood 11 each.

The girls’ game, which followed due to homecoming ceremonies, started slowly for both teams, but Henryetta used a late rush to end the first quarter ahead by a score of 18-8.

The Lady Ponies were effectively broken by halftime, as the Lady Knights enjoyed a commanding 35-18 lead despite a sickness slowing the team down. The lead grew to 24 at one point, and by the end of the third Henryetta led 46-27.

Kellyville mounted an impressive late charge, but time ran out on the Lady Ponies who lost 54-44 to Henryetta. The Lady Knights picked up their fourth straight in the series and were led by sophomore Lauren Flanary who scored 16 points along with sophomore Miranda Harjo and junior Bobbie McCullar who tallied eight points each.

Henryetta is scheduled to host the next two games, but in actuality who knows when they will actually be played because of the incoming winter storm.